It’s been nine years since the San Francisco 49ers have been in the playoffs and have hosted a playoff game. This Saturday ( January 14th ) they will play host to the 13-3 regular season NFC South division champions New Orleans Saints led by quarterback Drew Brees with a 1:30 PM local time kickoff.

The 49ers last home playoff game in 2003 was a wild and exciting game against the New York Giants that featured the 2nd biggest comeback in NFL playoff history ( 24 points ) and a good deal of interesting officiating. The first photo in this post shows what many thought was an interception by #29 Ahmed Plummer 2 plays before what was to be a botched field goal attempt by the Giants that would have won the game. 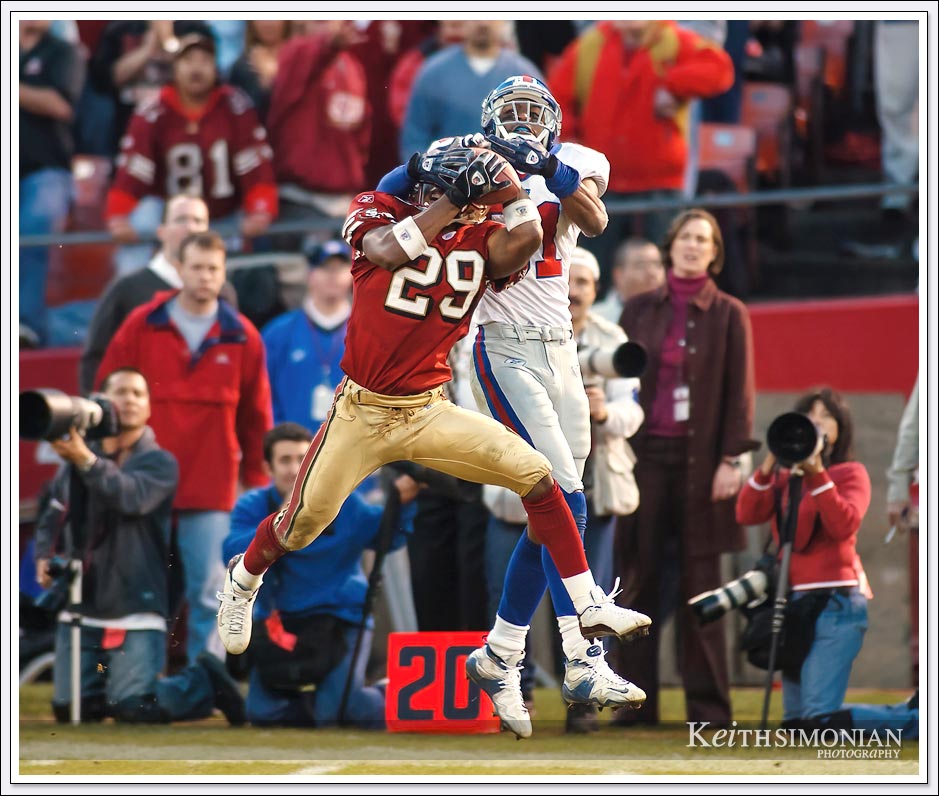 Instead of rehashing the rest of the 2003 playoff game, I’m going to do more of a “where are they now” feature. First up, T.O., or as the program says, #81 Terrell Owens. TO had a great game that day in 2003 with 9 catches for 177 yards and two touchdowns. He would play one more season for the 49ers before heading to the Philadelphia Eagles. It took just two years before he wore out his welcome there. Next up, the Dallas Cowboys for three seasons. Then one season with the Buffalo Bills, and in 2010 his final NFL season was with the Cincinnati Bengals. In October of 2011 Owens held an open workout hoping to attract the attention of another NFL team. Not one team sent anybody to watch. 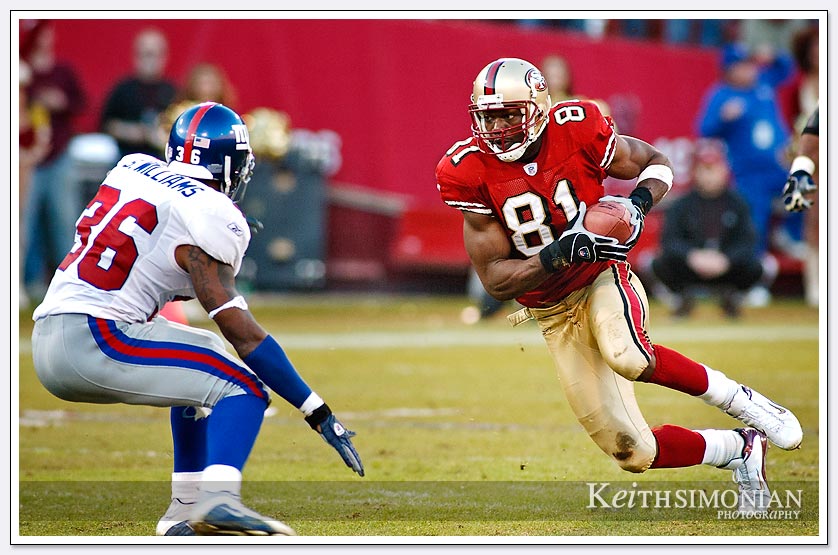 Kerry Collens #5 the then Giants quarterback played one more season with them before moving onto the Oakland Raiders for two seasons, the Tennessee Titans for 5 seasons, and finally the Indianapolis Colts for the 2011 Season. 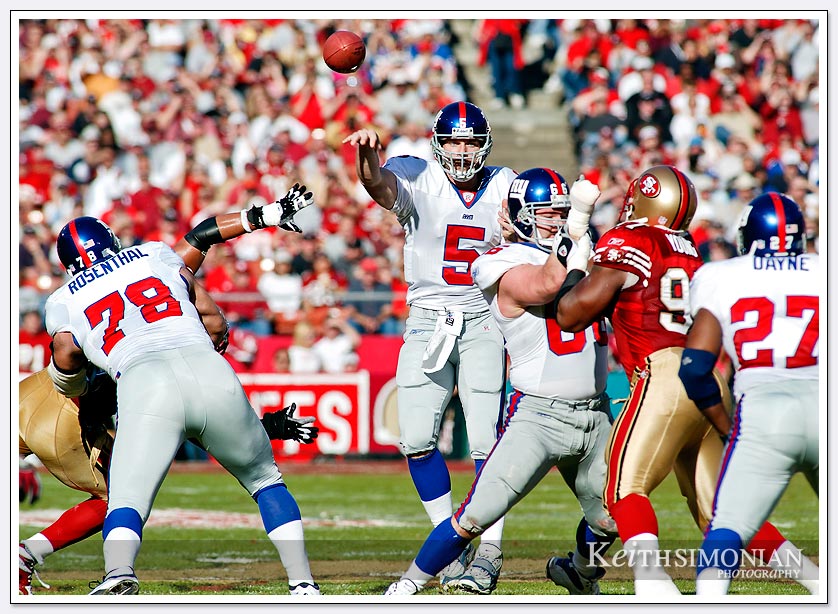 #81 Amani Toomer was a East Bay Area product having first attended Albany high school, and the transferring to Northern California football powerhouse De La Salle high school in Concord, CA. After attending the University of Michigan he was the 34th overall draft pick in the 2006 NFL draft being selected by the New York Giants. He played 13 seasons with the Giants and was part of the 2008 team the won the Super Bowl XLII against the New England Patriots. 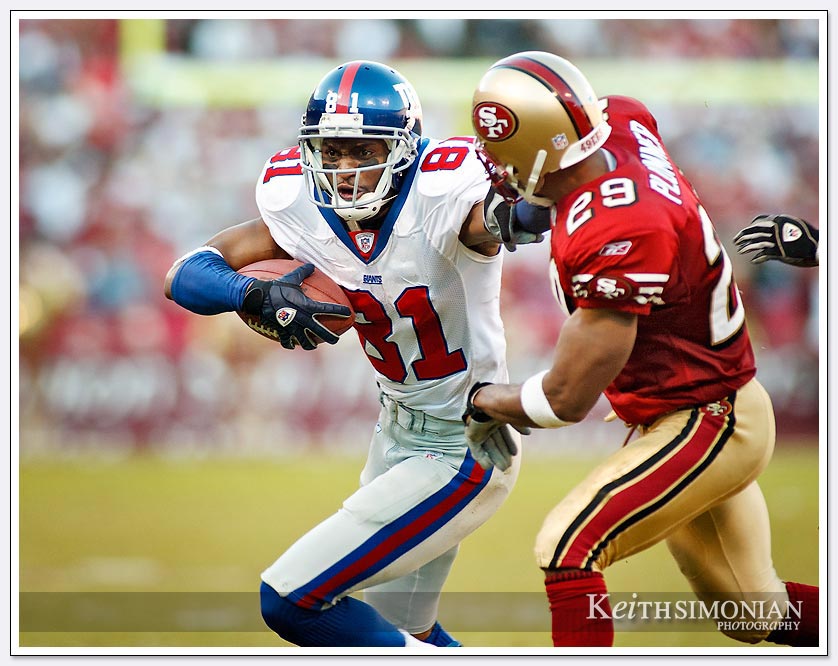 Quarterback #5 Jeff Garcia played his college career at San Jose State University. With no NFL offers, Garcia went North to play in the Canadian Football League where he played for the Calgary Stampeders. In 1999 he was signed by the San Francisco 49ers as a backup for NFL Hall of Famer Steve Young. Following Young’s retirement in 1999, Garica became the starting quarterback. In 2003 he was released by the 49ers and played the 2004 season with the Cleveland Browns. After the Browns he played for the Detroit Lions ( 2005 ), Philadelphia Eagles ( 2006 ), Tampa Bay Buccaneers ( 2007-2008 ), Oakland Raiders & Philadelphia Eagles ( 2009 ), Omaha Nighthawks ( 2010 ), and back in the NFL with Houston Texans for the 2011 Season. The Texans will play the Baltimore Ravens in the AFC Divisional playoff game this Sunday with a 10 AM ET start. According to the Houston Texan depth chart, Jeff Garcia is listed as the 3rd string quarterback for the game at the M&T Bank Stadium. 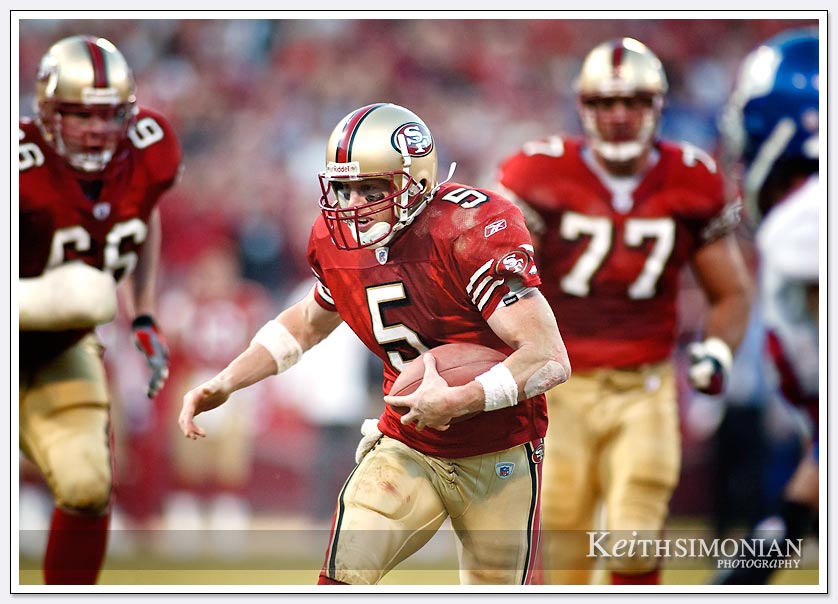 “Are you not entertained?”
I don’t recall #32 Kevan Barlow saying this during the play, but it look like he could have. Barlow had a six year NFL career that ended in 2006 with 84 regular season, and 2 playoff games. During those six years he had 31 touchdowns over 4,000 yard rushing. 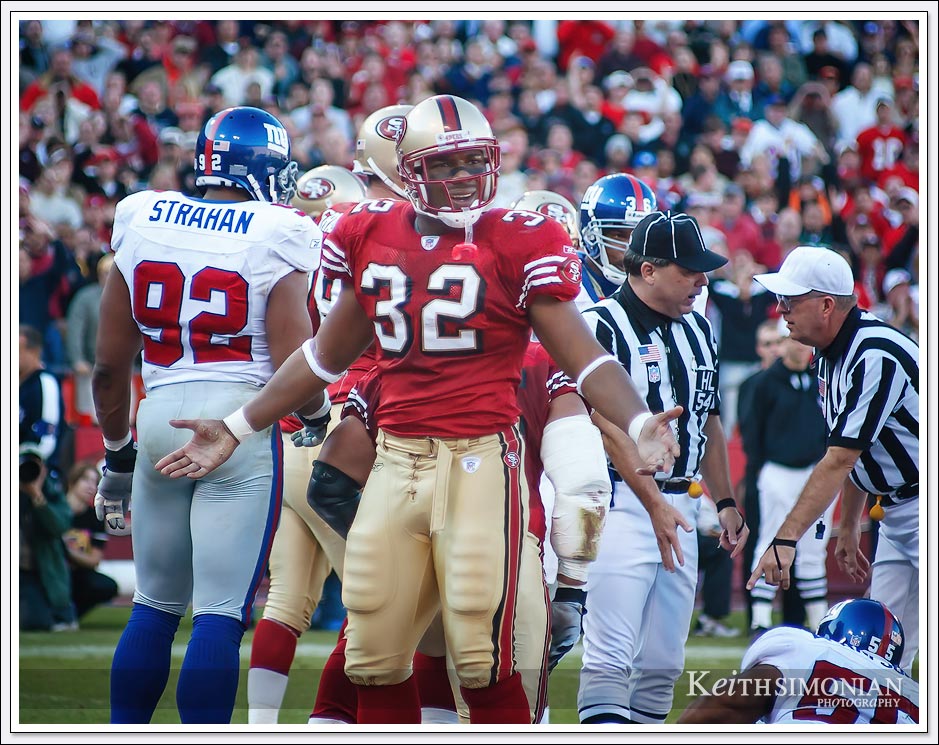 I have no idea where this gentlemen is now. 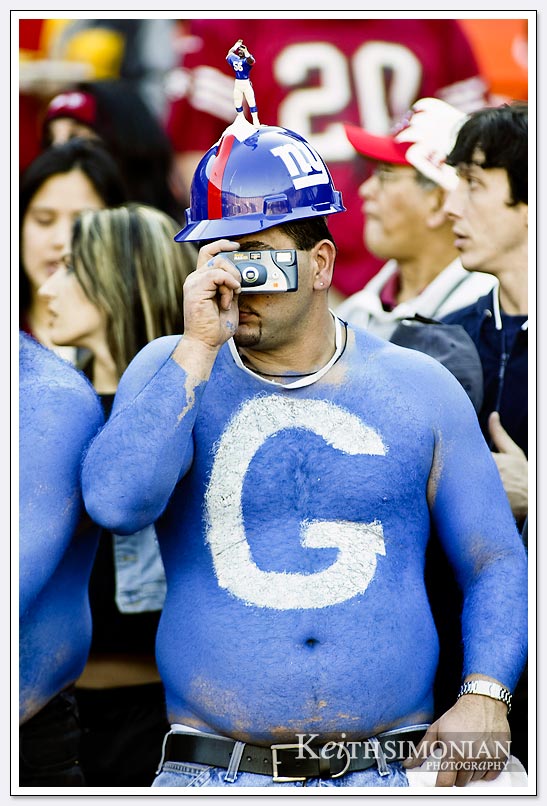 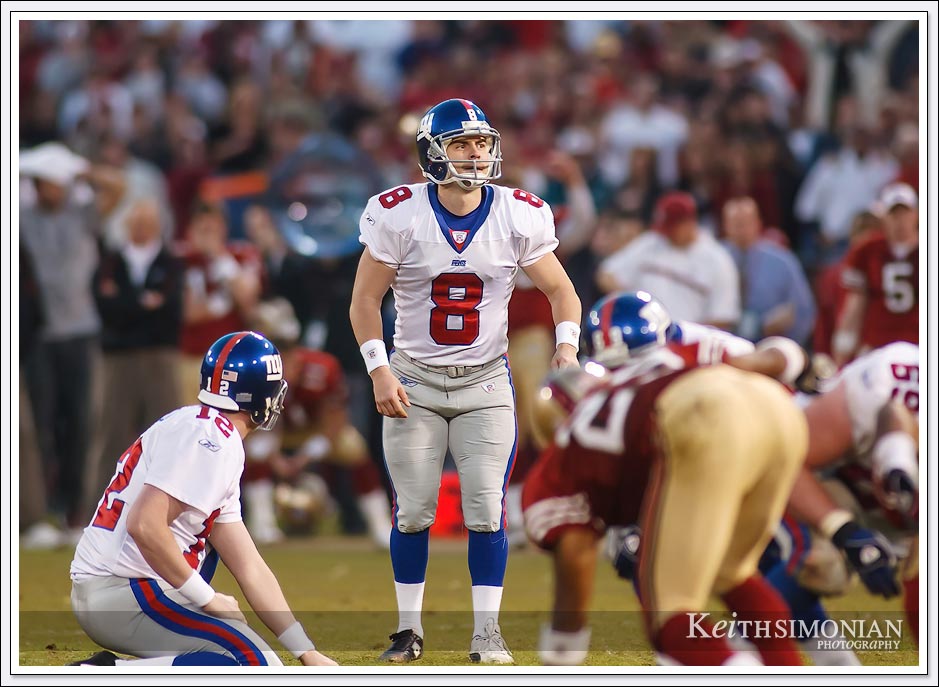 Giants kicker Matt Bryant ( #8 ) lines up for what would be the game winning field goal against the 49ers with punter Matt Allen set to hold.
Turns out Matt Bryant never got the chance to kick the field goal because of a bad snap.
Matt did have an 18 year NFL career playing in 241 games including playing the last 11 with the Atlanta Falcons with his last year being the 2019 season. 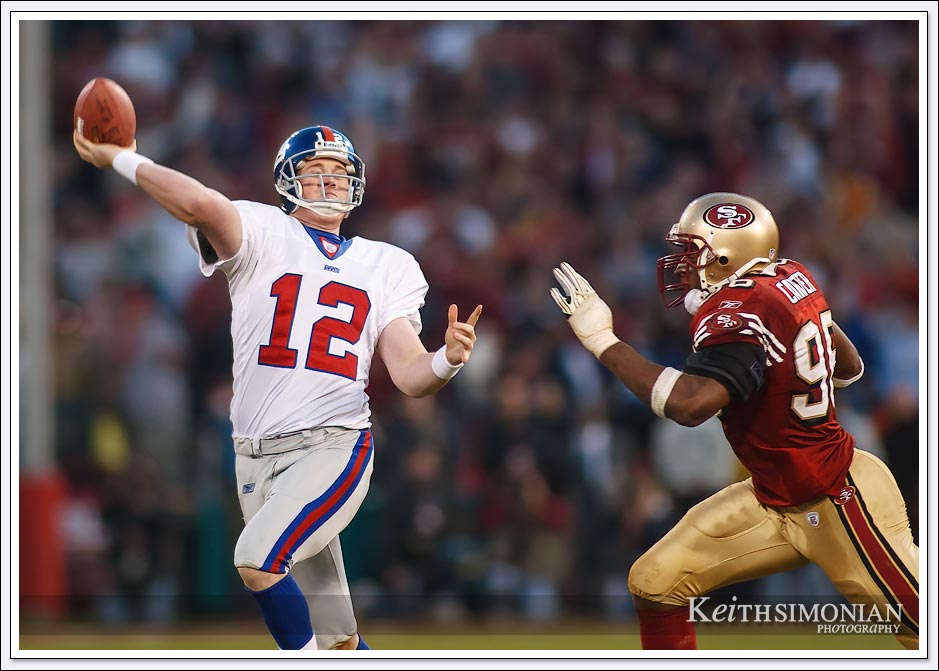 I don’t know if this was Punter Matt Allen’s only attempted pass during his one year career in the NFL with the New York Giants, but it failed. Generally speaking on a field goal attempt to win the game, you don’t want your punter who was the holder trying a pass.

Matt played just one year in the NFL with the Giants playing in 14 games and having a career long punt of 65 yards.

The 49ers lost the next week to the eventual Super Bowl champion Tampa Bay Buccaneers.  That game marked the end of Steve Mariucci’s coaching time with the 49ers as fired on Janaury 15th in what many thought was a power struggle with then 49er General Manager Terry Donahue. During his 6 years as head coach of the San Francisco 49ers Mariucci had a 60-43 ( .583 ) record including 4 playoff appearances. Dennis Erickson became the new head coach and lasted all of two years with a record of 9-23 during those years. GM Terry Donahue was also fired along with Erickson. Mike Nolan was next hired at head coach and lasted 3.5 years and was fired mid season and replaced with Mike Singletary. “Coach” Singletary lasted 2.5 seasons and was fired at the conclusion of the 2010 season. The 49ers hired highly recruited Jim Harbaugh from Stanford University in January of 2011, and have never looked back as they finished the 2011 NFL regular season with a 13-3 record and the 2nd seed in the NFC playoffs.

The only player still on the 49er team that played in that 2003 playoff game is Brian Jennings #86 the team’s long snapper. Jennings played college ball at Arizona State and was the 230th player ( 7th round ) selected in the 2000 NFL draft, and has played his entire 12 year career with the 49ers. Jennings would play his last season in the NFL with San Francisco 49ers during the 2012 season. He ended his career having played 208 NFL games.