It was the biggest home game for the San Francisco 49ers since their come from behind victory over the New York Giants during a 2003 playoff game almost 9 years ago. While the 49ers were victorious over the visiting Pittsburgh Steelers 20 to 3, the game will most likely be remembered as the night the lights went out in Candlestick park stadium not once, but twice.

The first outage  which last 20 minutes occurred just before kickoff and pushed back the start of the game  about 20 minutes. The teams were in their locker rooms at the time of the outage. Instead of the normal pre-game hoopla the precedes kickoff for a NFL game, the teams were allowed to come out and warm up for  an addition 10 minutes and the game started shortly thereafter The SECOND outage occurred during the 2nd quarter during a television time out with 12 minutes and 13 seconds left in the quarter. This time the teams were on the field and just waited around as did all the sellout crowd of 69,732 who were in attendance for the 49ers last regular season home game.

This photo shows Pittsburgh Steeler players and  NFL officials waiting out the 2nd power outage which happened early in the 2nd quarter. While the photo of the players and officials waiting appears to have ample light, the photo was made at ISO 1600 at 1/20 of a second at f2.0 on a 135mm canon lens. With the stadium lights on, the game action photos were made at ISO 1600,  1/640, at f3.2 or 6 stops higher than the power out photo. Six “f stops” brighter equates to 64 times brighter with the lights on. 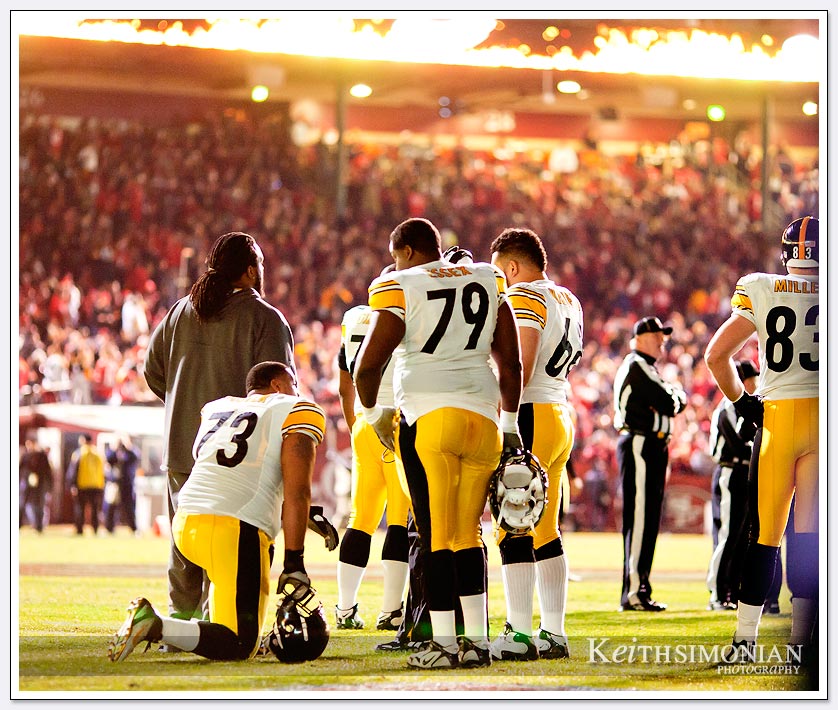 There was indeed a complete football game played on Monday night, and the stingy 49er defense held the defending AFC Champions Pittsburgh Steelers to just 3 points in their victory. The game marked an NFL record 14 games the 49ers have not allowed a rushing touchdown scored against them. It wasn’t perfect form, but San Francisco 49er #29 Chris Culliver did hold on to the jersey of Pittsburgh Steeler #17 Mike Wallace and make the tackle during this 2nd quarter play. 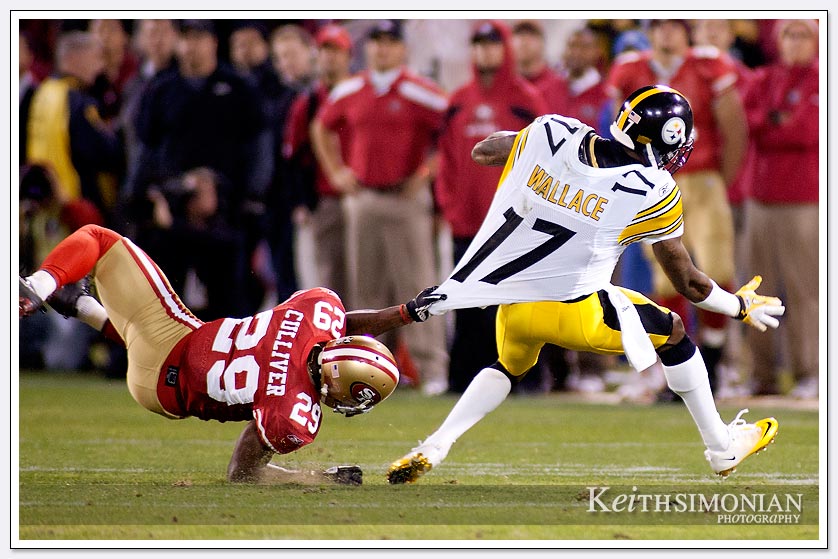