With the announcement of the new Canon 90D DSLR, I thought it might make a good 2nd camera for NFL games. I use the Canon 1DX as my main camera mostly mounted on a Canon 400 f2.8. When needing extra lens length, I use the Canon 1.4 tele extender ( Version 3 ) on the 400mm for an effective length of 560mm ( with a one stop loss ). The Canon 90D being a 1.6 crop lens, using it on my 400mm gives me 620mm f.2.8 lens.
So it was off to Levi’s Stadium in Santa Clara, CA for the San Francisco 49ers 2019 regular season opener against the Pittsburgh Steelers to put the new Canon 90D through it’s paces to see if it could handle the fast pace of NFL action.

Before we get to the images, a couple technical notes. The Canon 90D images were captured in full JPG & CRAW. All the images in this post were made from the full sized JPG’s, with the exception of the one 1DX file which was converted from a full RAW file. Shooting in full JPG and CRAW allowed at continuous blast of at least 30 images in the high speed auto servo setting. The files were captured on a Sandisk 64GB Extreme Pro SDXC UHS-1 card with a write speed of 170MB. I turned off any extra features the camera provides so as to increase the fps. That included turning off Noise Reduction and Anit-Flicker option. All the images were made using the Optical Viewfinder.
The files were processed in Lightroom 6 and then cropped and logo added in Photoshop CS5. Yeah, that’s right, I don’t pay Adobe every month to use their software. The settings the files were batch processed in LR were as follows: Exposure +.2, Highlights -10, Shadows +38, Blacks -5, Clarity +17, Vibrance +10, Saturation +4, Sharpening 100, Masking 35, Noise Reduction Luminance 29, Color 25 and Post Crop vignetting -13. Once in Photoshop some of the photos had more minor adjustments made, but the batch processing was a pretty good starting point. 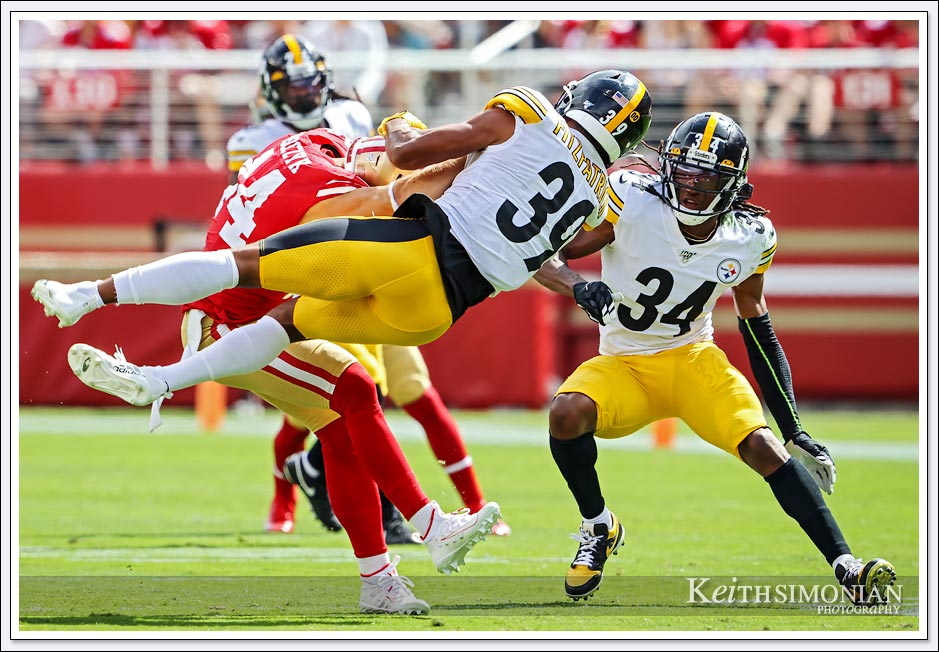 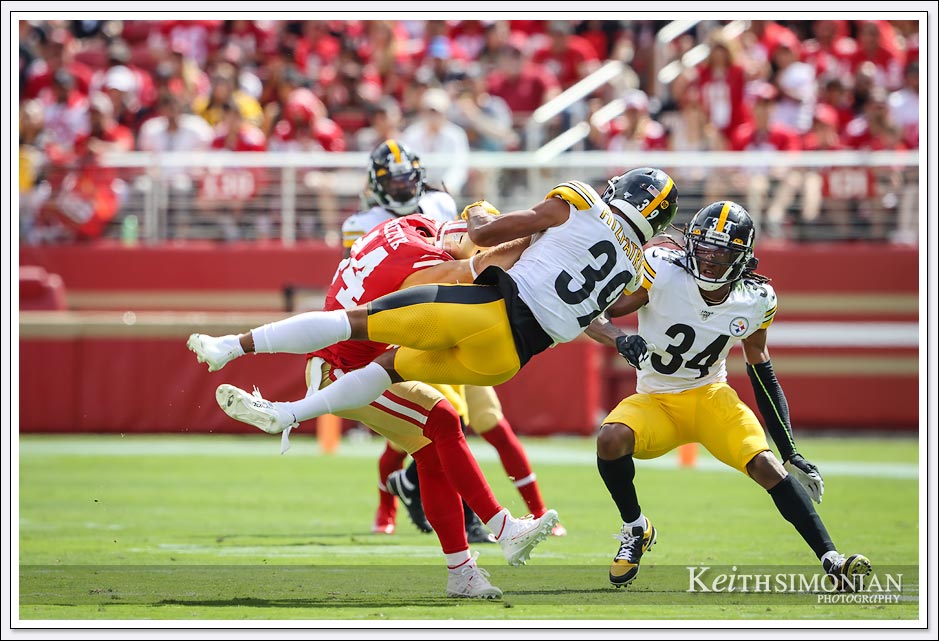 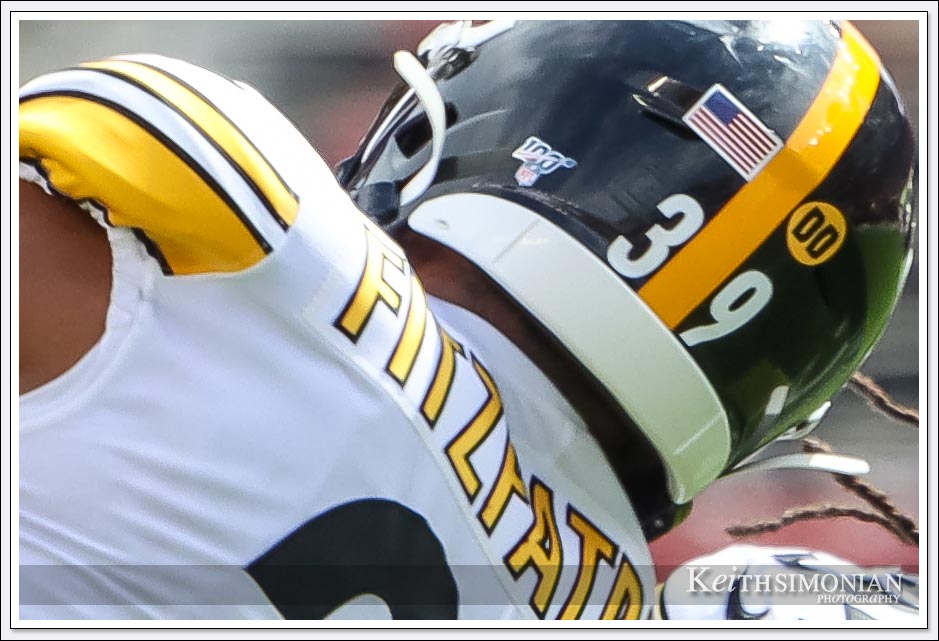 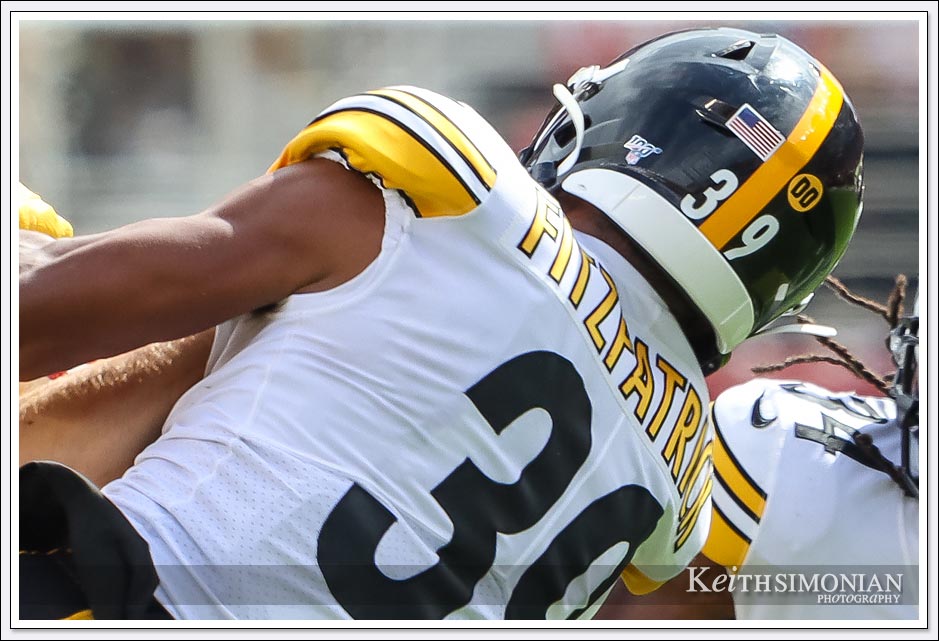 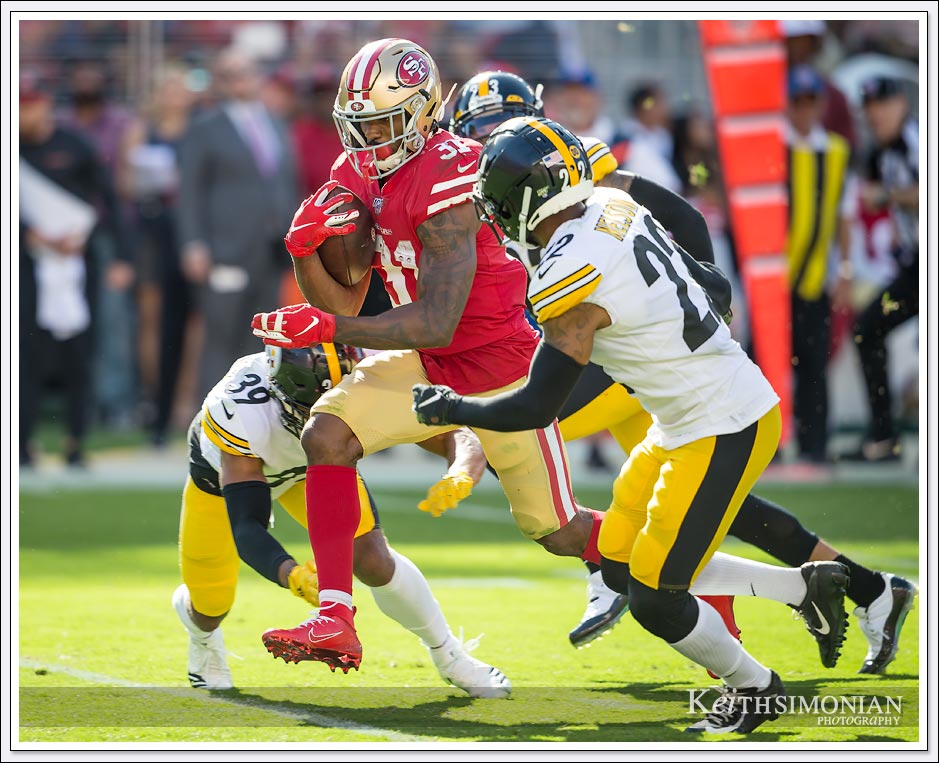 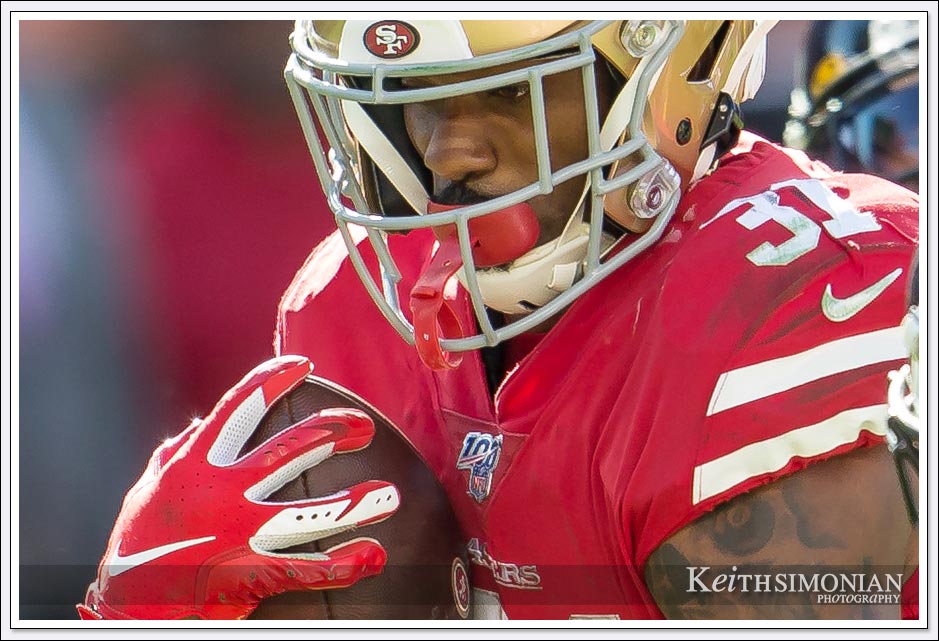 This 900 pixel x 600 pixel section was taken from the full frame 5184 x 3456 pixel 1DX file. Just my two cents, but the 90D full sized file shows more grain and isn’t quite as sharp as the 1Dx file. That said, if you reduce the much larger 90D file down to the 1DX file size, I think they look about the same. No scientific methods were used for this determination, I’m just eye balling it. 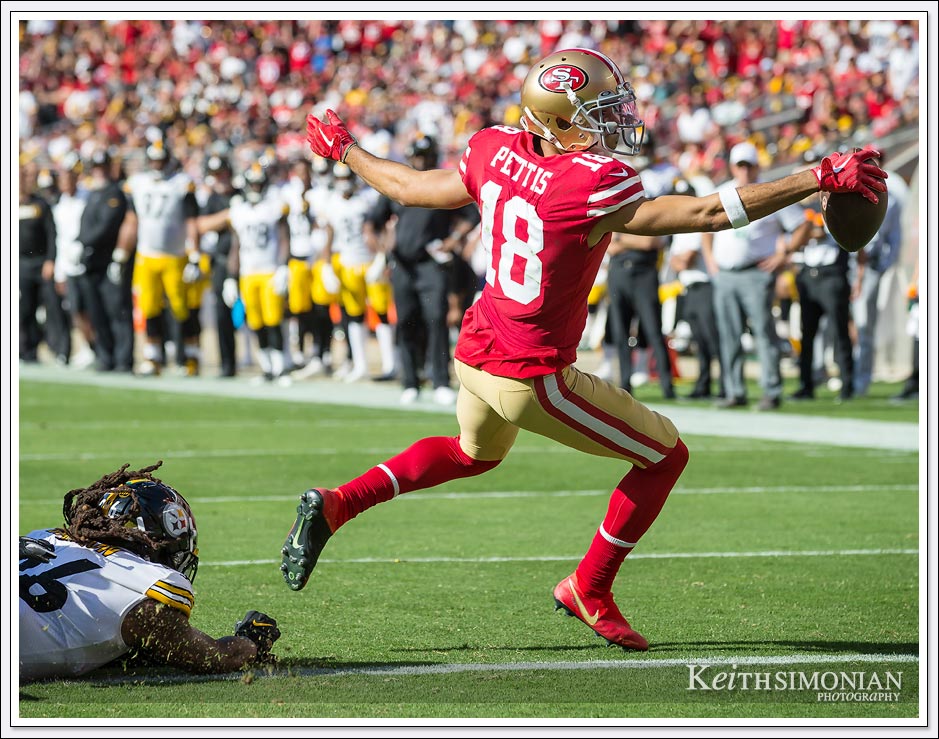 This was the game winning touchdown by #18 Dante Pettis against the Steelers. This image was captured with the Canon 1DX on a Canon 70-200 f2.8 lens. On previous series when either team was close to the end zone I used the 90D on the 70-200 to get the extra reach. On this series of plays there was no need for extra reach as the 49ers were inside the 10 yard line. The other main reason for using the 1DX over the 90D is that you do get a higher frame rate ( 10 fps vs 8 fps )  and better auto focus. 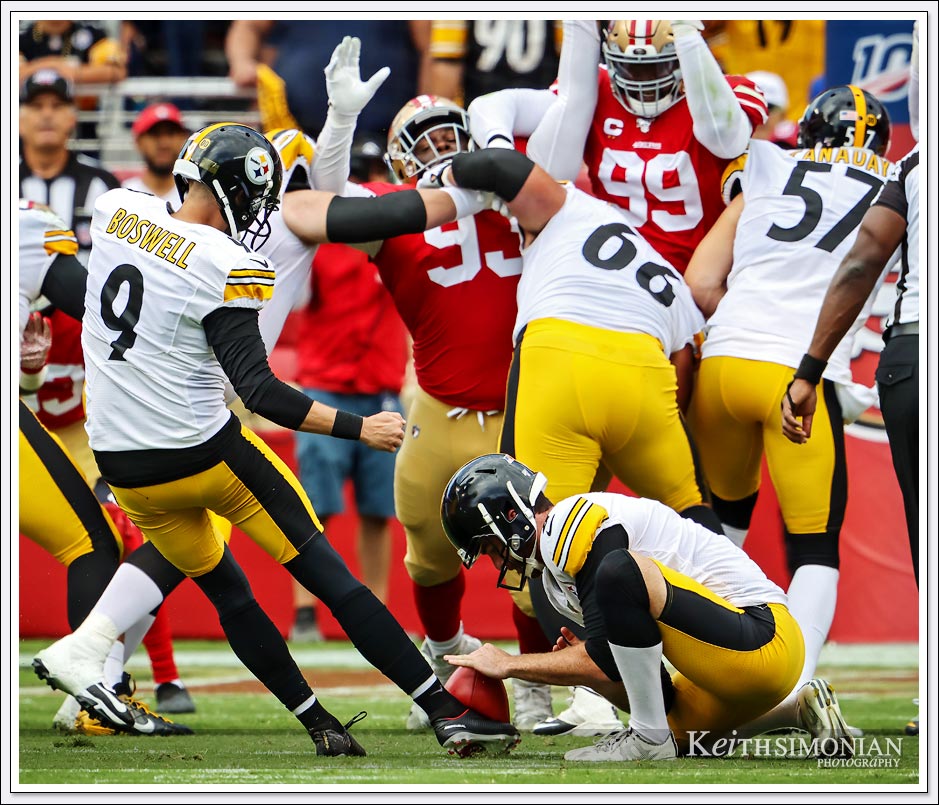 Field goal attempt by Steelers kicker #9 Chris Boswell with 1.4 tele coverter on Canon 90D and 400 mm lens for an effective lens length of 896 mm.  The math being 400 mm x 1.6 crop x 1.4 converter. The field goal image is cropped to appx. 75% of the horizontal full frame image. ( Hope that makes sense  – I was shooting horizontally, and the picture you see is about 75% from top to bottom of the frame ) 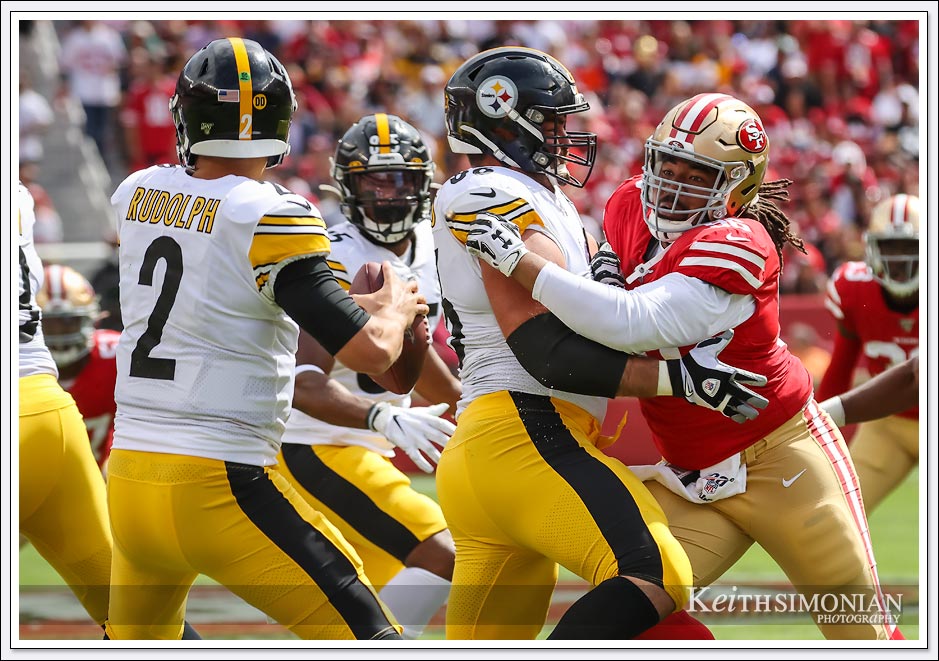 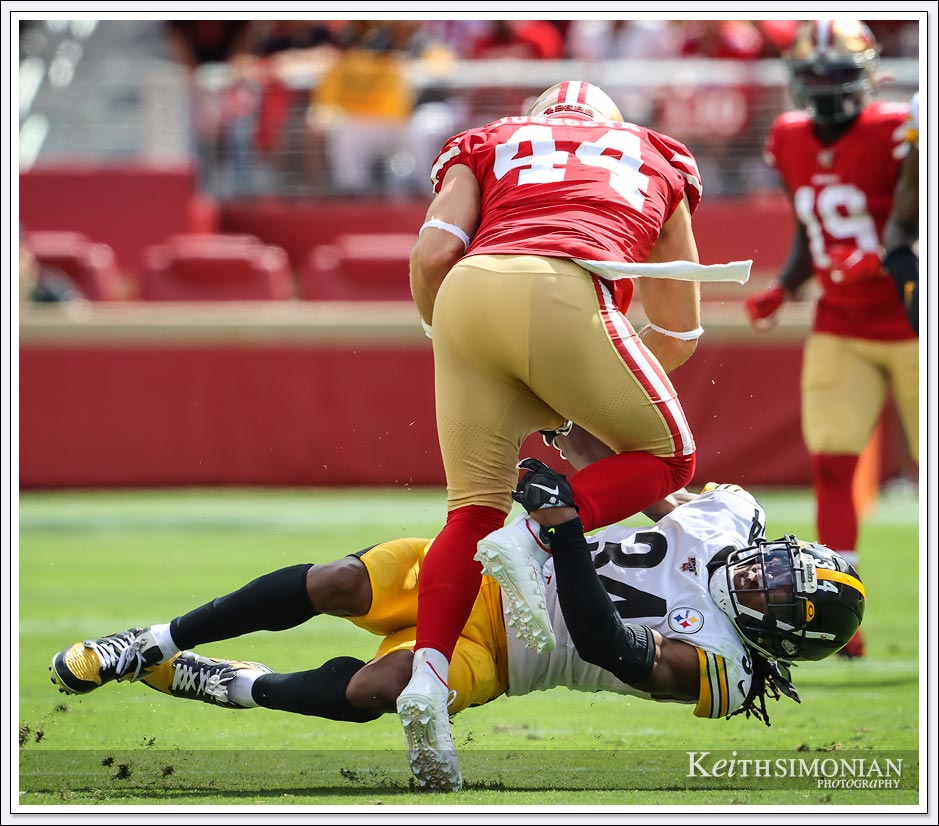 This is a continuation of the play shown in the very first photo of this post. Steeler #39 Minkah Fitzpatrick sailed by 49er #Kyle Juszczyk and missed that tackle, so now Steeler #34 Terrell Edmunds hangs on while other Steeler defenders help make the tackle. There were 31 images made during this continuous burst. This image was the 18th. 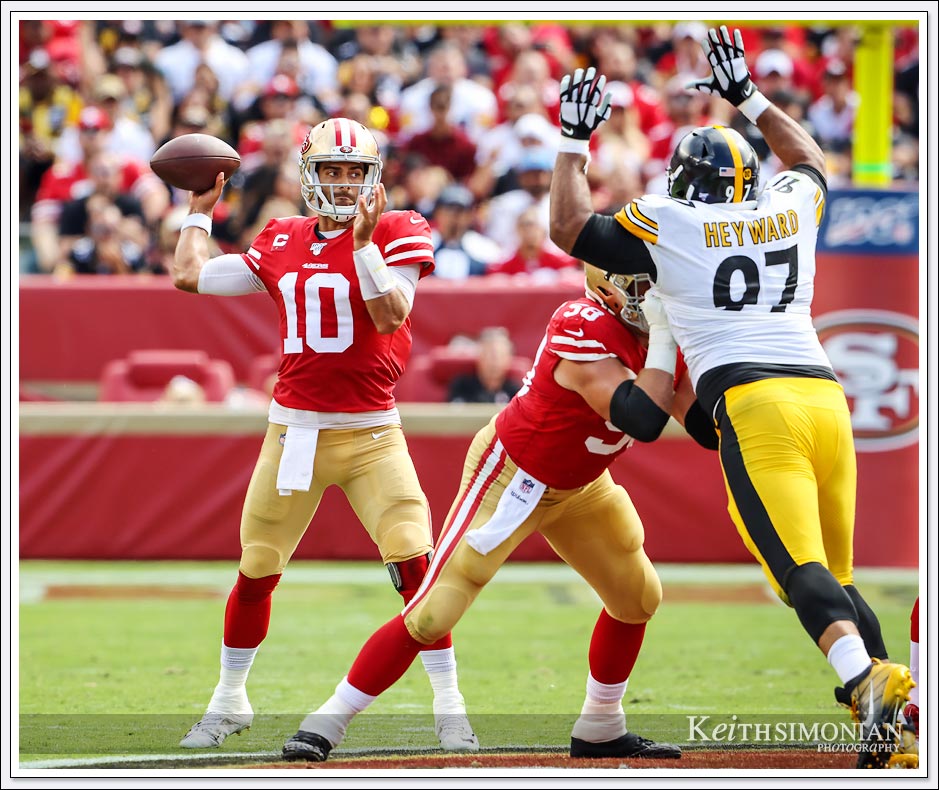 Nothing award winning about this image, but does show the reach of a Canon 90D on a 400mm lens. San Francisco 49er quarterback Jimmy Garoppolo is standing on about the 45 yard line of the 49ers. That makes him about 70 yards from my position in the Pittsburgh end zone. In the full frame file, the quarterback fills about 75% of the horizontal image. 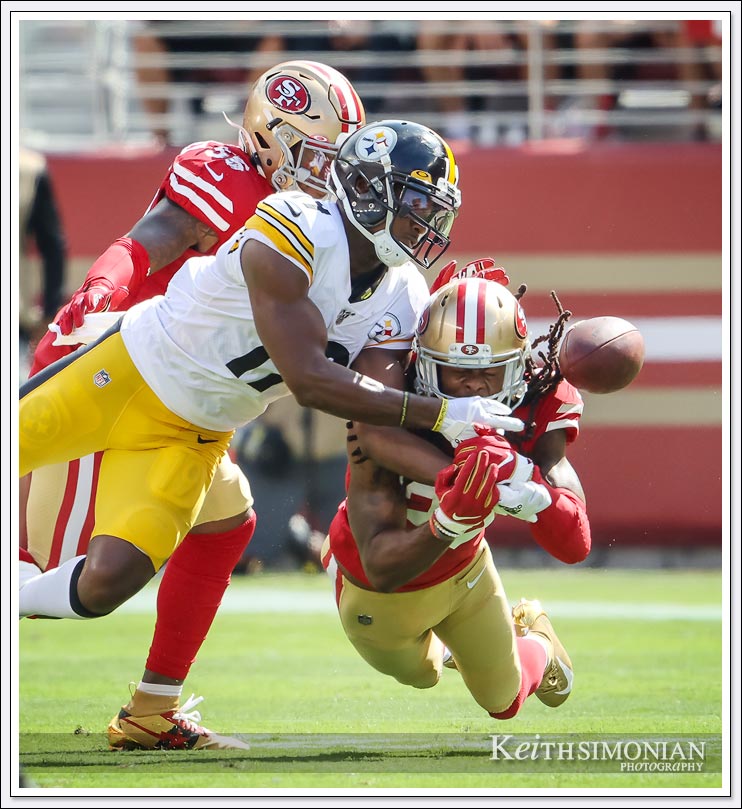 49er cornerback #25 Richard Sherman breaks up a pass intended for #19 Steelers wide receiver JuJu Smith-Schuster. This play happened about 80 to 90 yards down field from my position and is a pretty good sized crop from the file created by the Canon 90D on my 400 mm lens. 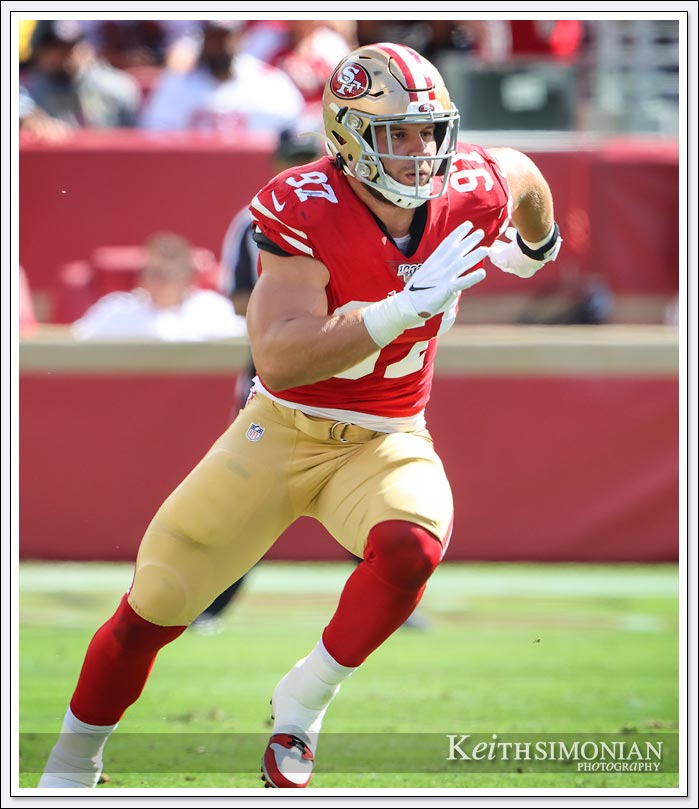 With the 2nd pick in the 2019 NFL draft, the San Francisco 49ers selected #97 Nick Bosa from Ohio State. This image is the 5th in a series of 27 continuous photos. I was doing an isolation shot of #97. I didn’t realize till looking at the data from these photos that this series was made with Canon 1.4 tele converter on. 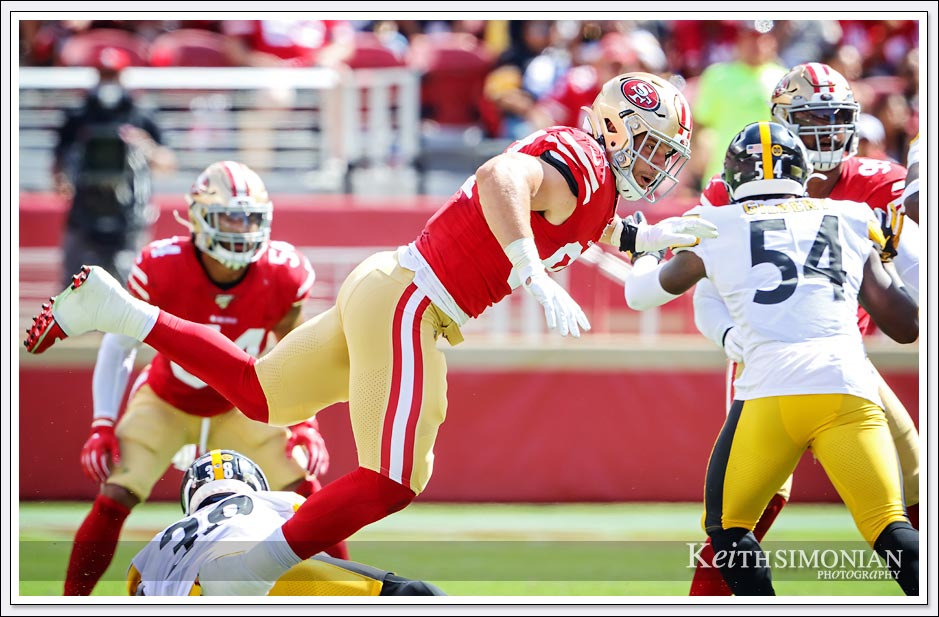 The 14th photo in the series shows #97 Nick Bosa leaping, lunging, or falling. Looking closely at the time stamps for the series, there was a 10 fps portion of images. I think this was accomplished because I was just focusing on a single players who was essentially running towards the camera instead of a more herky-jerky motion normally involved with football. 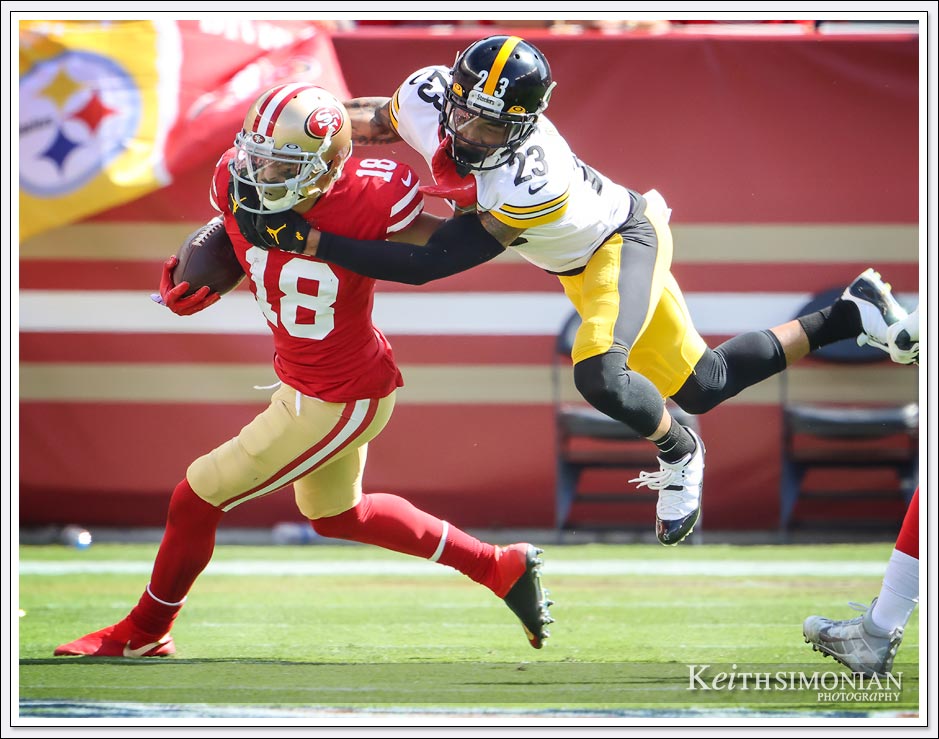 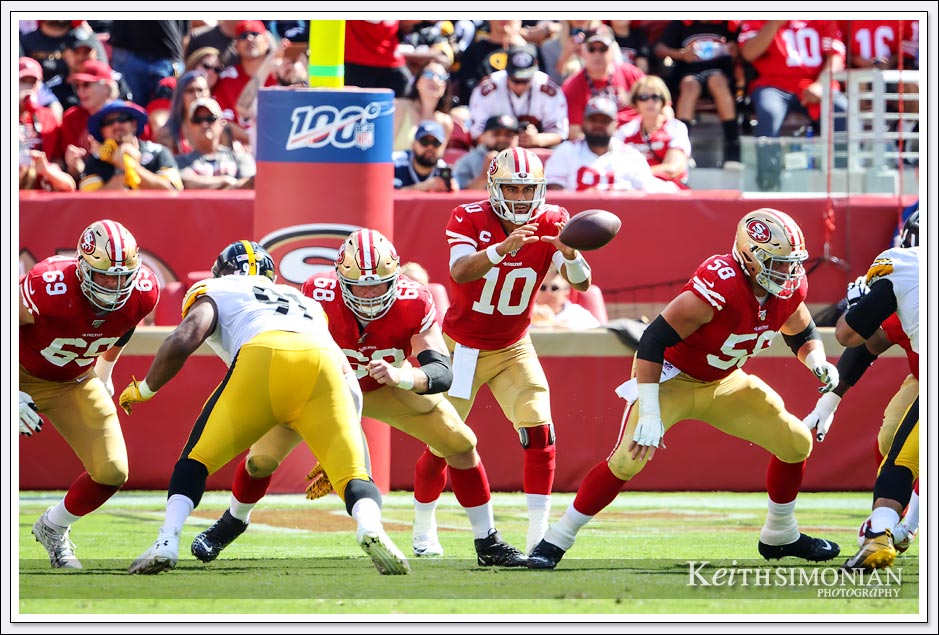 Full view with 1.4 converter on the 400 mm and Canon 90D. 49er quarterback Jimmy Garoppolo is taking the snap from #58 Weston Richburg about 90 yards from where I am positioned. 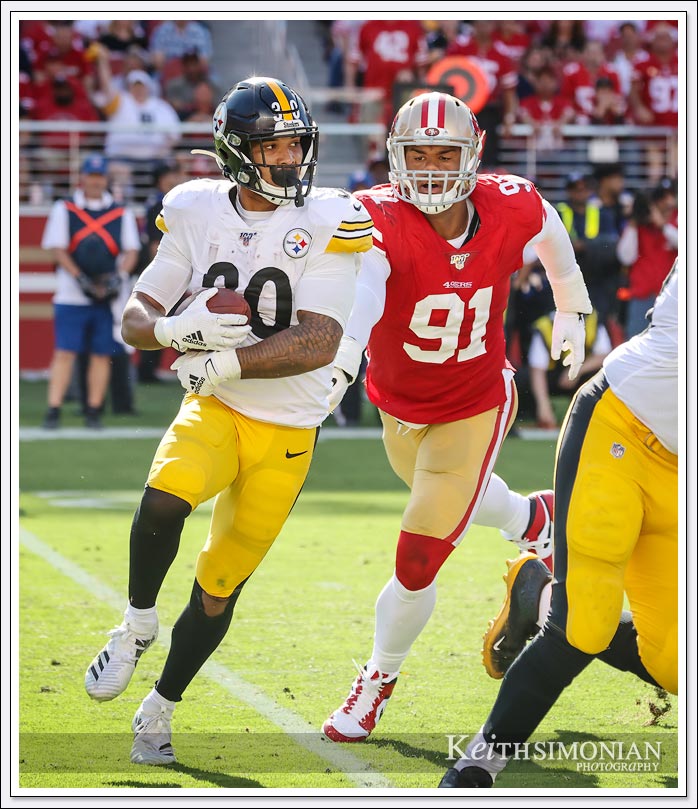 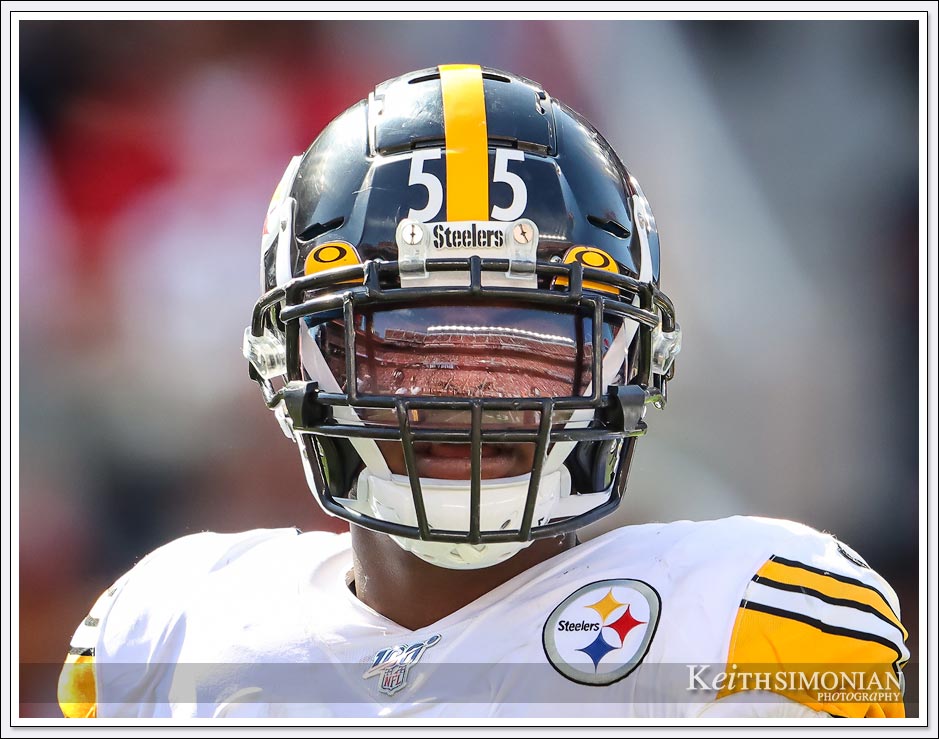