Aaron Rodgers became the first former California Golden Bear ( CAL ) quarterback to lead a National Football League  team to victory in a Super Bowl when the Green Bay Packers defeated the Pittsburgh Steelers 31 to 25 in Super Bowl XLV played in Cowboys stadium in Texas on February 6, 2011. He was also named the game’s most valuable player ( MVP ). The winner of the award is chosen by fan voting during the game and a panel of 16 writers who make their selection after the game. The fan votes count for 20% of the vote tally, while the writers votes make up 80% of the vote. Fan voting was first allowed during Super Bowl XXXV which was played in 2001 at Raymond James Stadium in Tampa, Florida.

Funny how things turn out some times.  Sports like life can take many twists and turns that nobody sees coming.Â  On September 27, 2003 Aaron Rodgers was the starting quarterback in what would be his biggest game to date as the #3 ranked USC Trojans came to Memorial Stadium to play the 2-3 California Golden Bears. Rodgers had transferred to Cal after playing one season for Butte Junior College located near Chico, California. The Bears won the game 34 to 31 in three over times. Looking back at the game now, it’s interesting to see how things turned out for many of the players.

After his 2nd season at Cal, Aaron Rodgers declared for the draft and was projected to be a top 10 pick. Rodgers 2005 draft day became a nightmare. He was drafted 24th by the Green Bay Packers where he would the backup QB behind Brett Favre for 3 seasons. 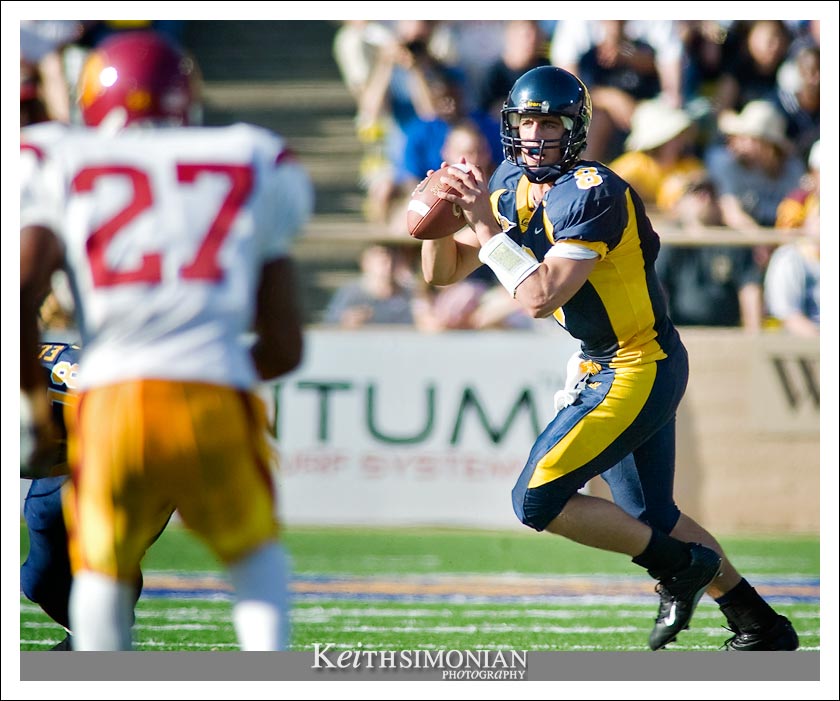 Playing under the temporary lights, Cal place kicker Tyler Fredrickson makes the game winning 38 yard field goal in the third over time giving the Bears a 34 to 31 victory over USC. 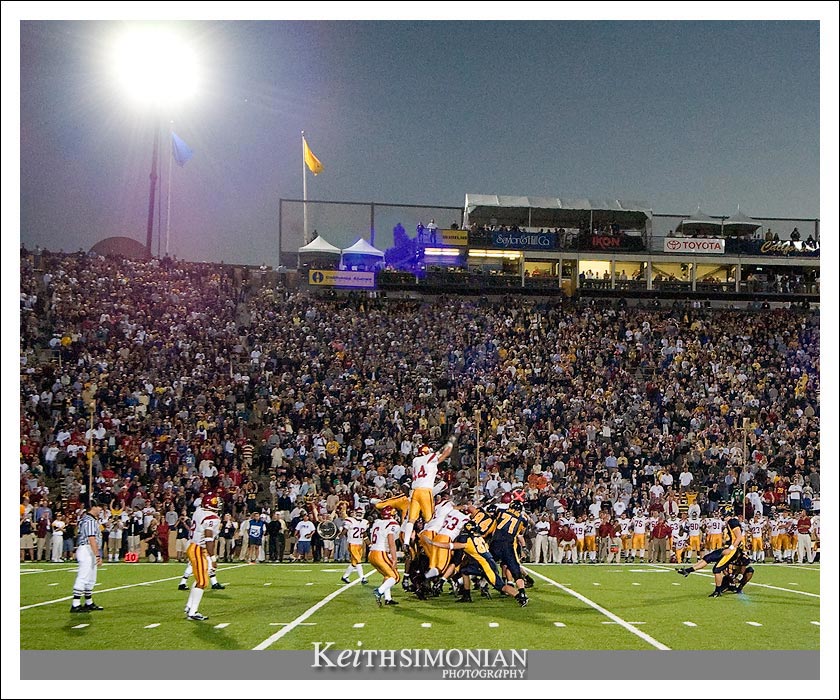 The other starting quarterback that day was Matt Leinart. After the 2004 college season which USC won the BCS national championship game against the Oklahoma Sooners Matt Leinart was projected as the number one pick in the 2005 NFL draft. He decided to stay another year at USC to try and win another BCS championship. That didn’t happen as USC lost to Texas in the BCS championship game. Leinart’s stock had fallen by the time the 2006 NFL draft rolled around, and he was selected 10th by the Arizona Cardinals. Things never worked out for Leinart at Arizona, and he is currently looking for a new team. 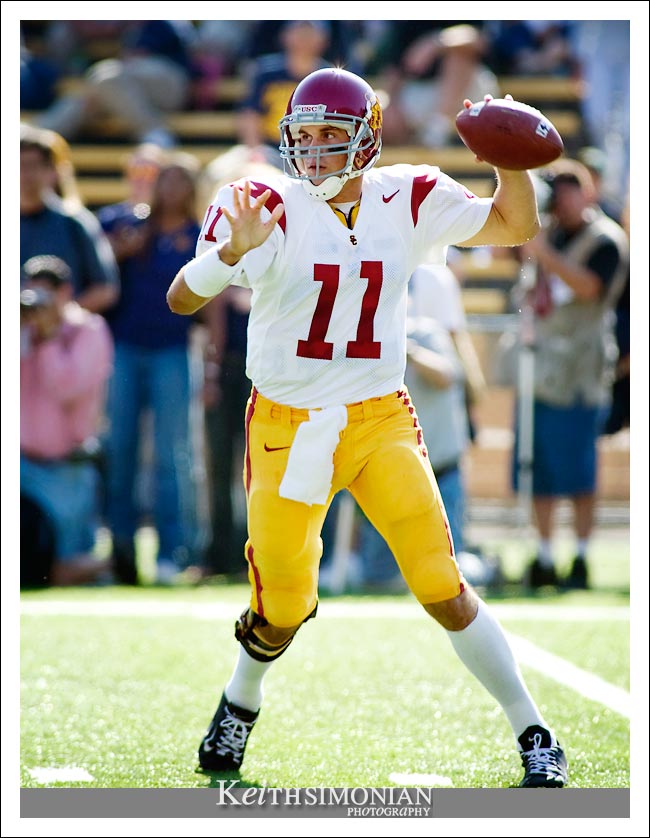 The USC coach at the time was Pete Carroll. In this photo from the 2003 game he is waiting to shake hands with Cal’s victorious coach Jeff Tedford while Cal fans run onto the field to celebrate the victory. Carroll was USC’s head coach from 2000 to 2009. He left for the NFL and the Seattle Seahawks after the 2009 season. Turns out to have been a brilliantly timed move as USC would be sanctioned by NCAA for violations of improper benefits to Heisman Trophy winner Reggie Bush dating to the Trojans 2004 national championship season. 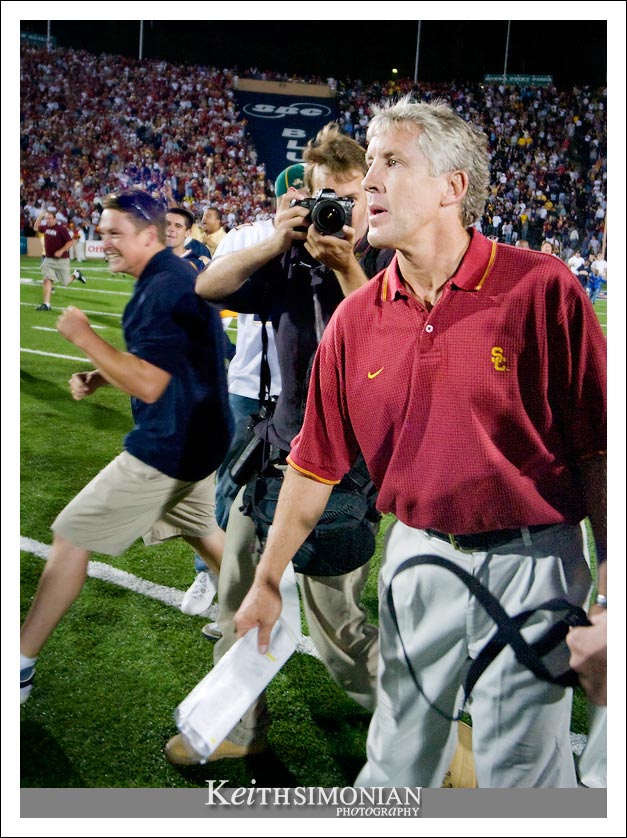 Though not a starter on that day Reggie Bush did have 4 carries for 7 yards. Two seasons later he was the Heisman Trophy Winner and was selected 2nd in the NFL draft by the New Orleans Saints. Those very same Saints won Super Bowl XLIV with Reggie Bush as the starting running back. The rest of 2010 didn’t go quite as well for Bush. In June of 2010 the NCAA threw the book at USC for improper benefits to Reggie Bush dating to the Trojans 2004 national championship. Then in September the Heisman Trust announced the vacation of Reggie Bush’s 2005 trophy. The Saints quest to repeat as Super Bowl champions lead them to a first round game against the first to ever enter the playoffs with a losing record, that being the now Pete Carroll coached Seattle Seahawks. The Saints were an eleven point favorite, but lost the game 41 to 36. 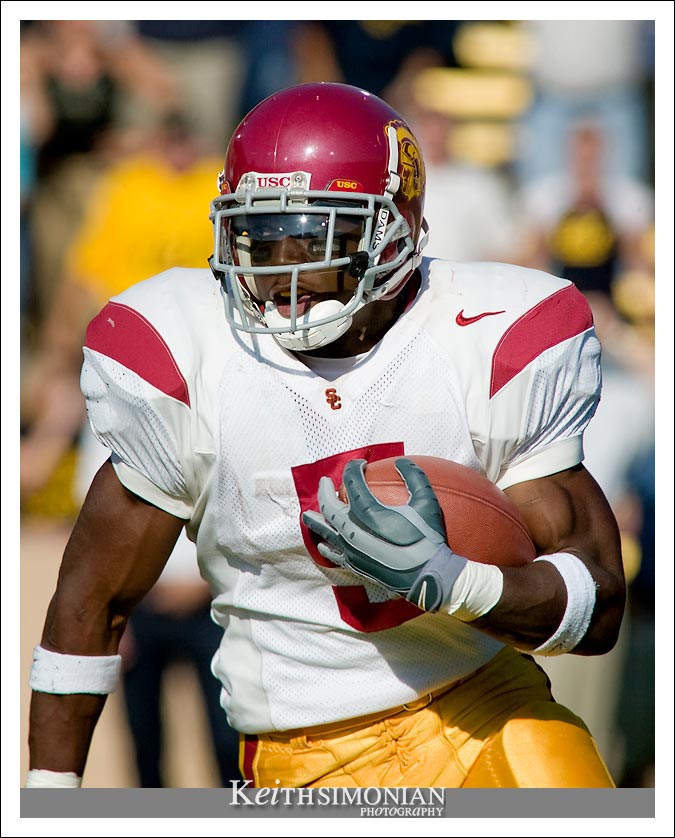 Wide receiver Mike Williams had a brilliant 2 year career at USC with 176 catches in 26 games for over 2500 yards receiving and 30 touchdown receptions. Williams was 10th overall player selected in the 2005 NFL draft by the Detroit Lions, where in 2 seasons, he caught just 37 passes. Before the start of the 2007 season, Williams was traded to the Oakland Raiders and was cut after just seven games. A month later and over weight Williams signed with the Tennessee Titans. By July of 2008 his NFL career was all but over as he was cut again. After two full seasons out of the NFL, he was signed at the start of the season by the Seattle Seahawks with their new coach, Pete Carroll. Having lost weight Williams once again blossomed into the receiver he was at USC where as if you have been paying attention, he was coached by Pete Carroll. In the Seahawks playoff win over the Saints, Williams had five catches for 68 yards, including a 38 yard touchdown reception. 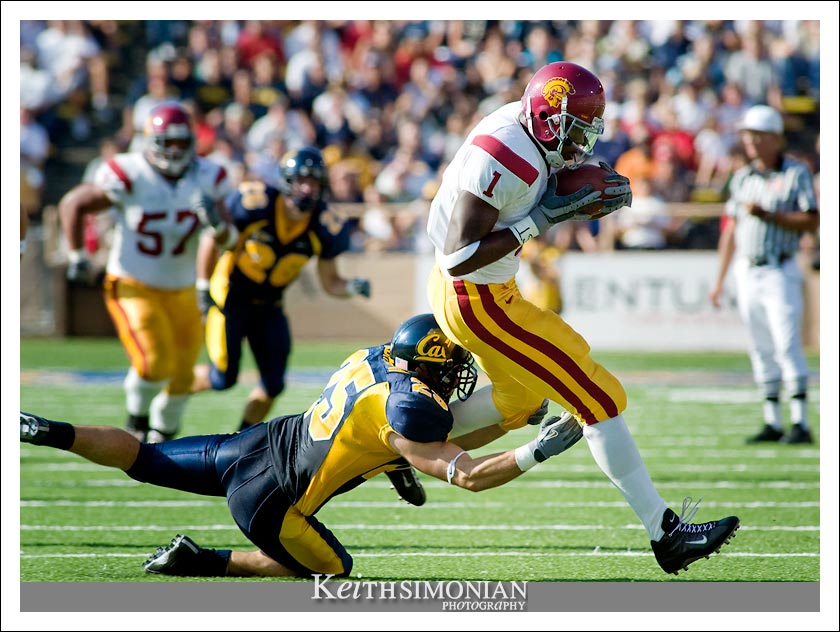 #99 Defensive Tackle Mike Patterson is shown here applying pressure to Cal quarterback Aaron Rodgers. Patterson was drafted 31st in the 2005 NFL draft by the Philadelphia Eagles and has played for them the past 6 seasons. 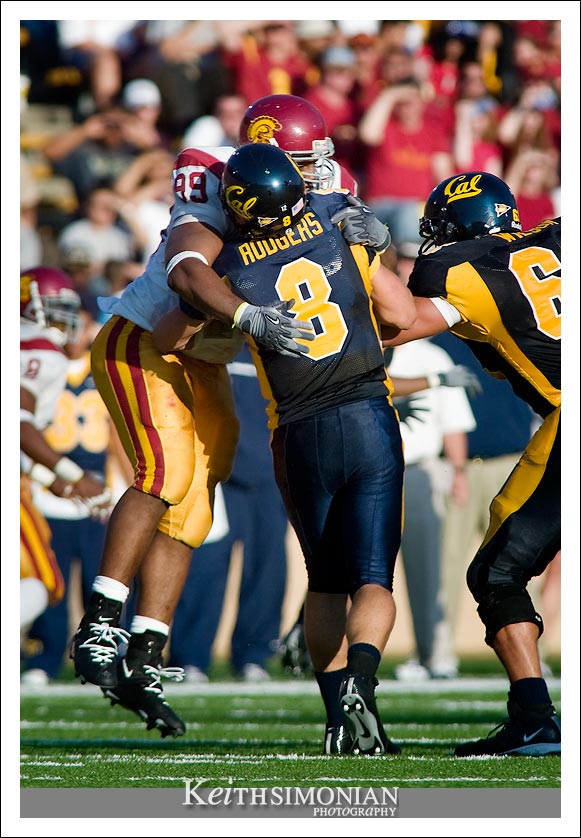 Kenechi Udeze was selected by the Minnesota Vikings in the first round of the 2004 draft. In his rookie year he was responsible for 5 sacks there by showing the promise the Vikings saw in him. After injuries he came back in the 2007 season and also had five sacks. In February of 2008 Udeze’s life changed forever as heÂ  was diagnosed with acute lymphoblastic leukemia — cancer of the blood and bone marrow. Kenechi received a marrow transplant from his brother and began the long road back to good health. His health was so good he even tried to make it back in the NFL.Â  Though he didn’t make it back into the NFL Udeze moved on with his life by going back to USC, and getting his degree in sociology. Now living in remission Udeze is the strength and conditioning coach for former USC offensive coordinator Steve Sarkisian at the Washington University. 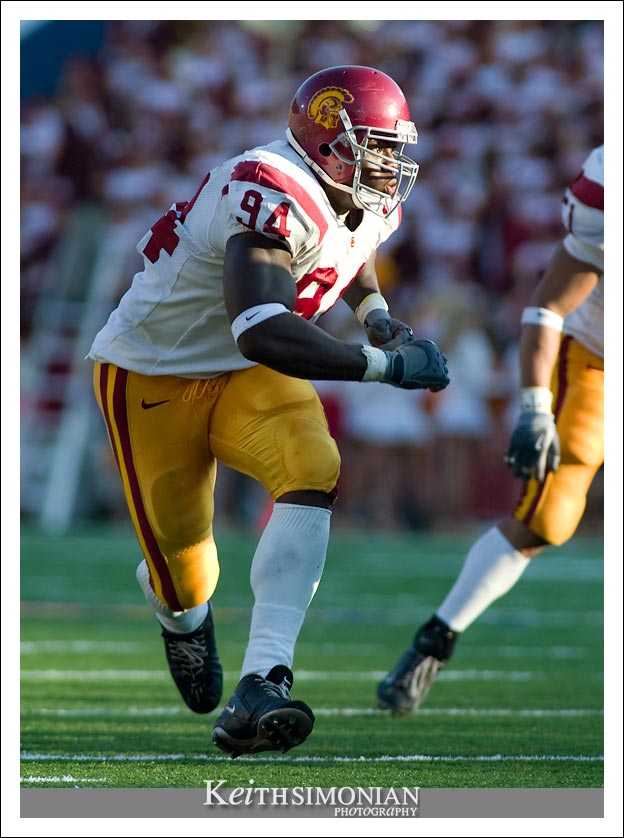 Lofa Tatupu was the 45th player selected in the 2005 NFL draft by the Seattle Seahawks. He has played for them the past six seasons, including the 2010 season where he was reunited with former USC head coach Pete Carroll. 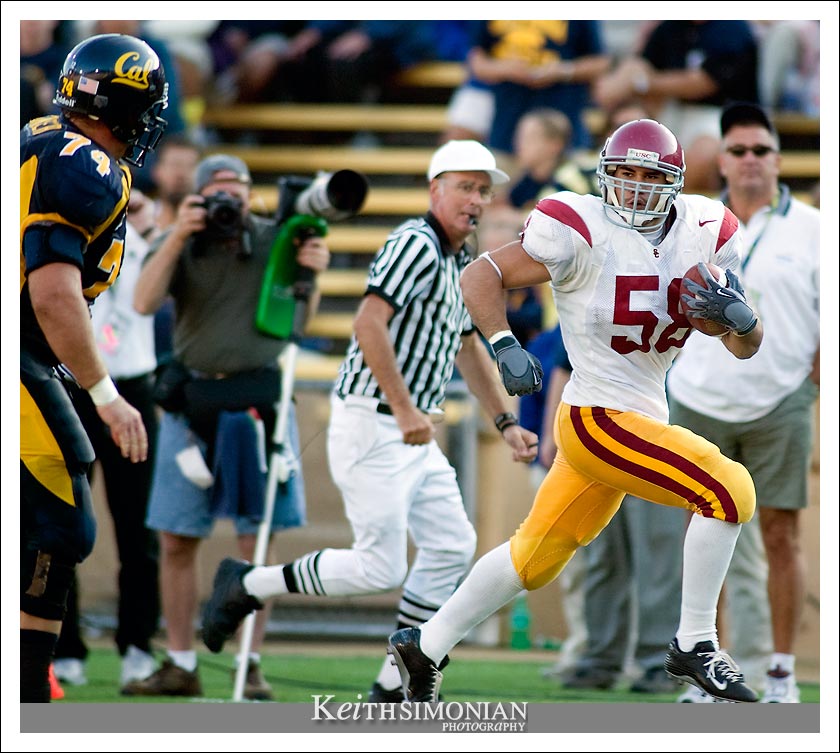 While he was the starting quarterback for the USC game, he didn’t finish the game in the QB position as he was replaced by Reggie Robertson in the 3rd quarter after passing for 217 yards with two touchdown passes and two interceptions. Rodgers can be seen on the left side of the photo wearing the headset. 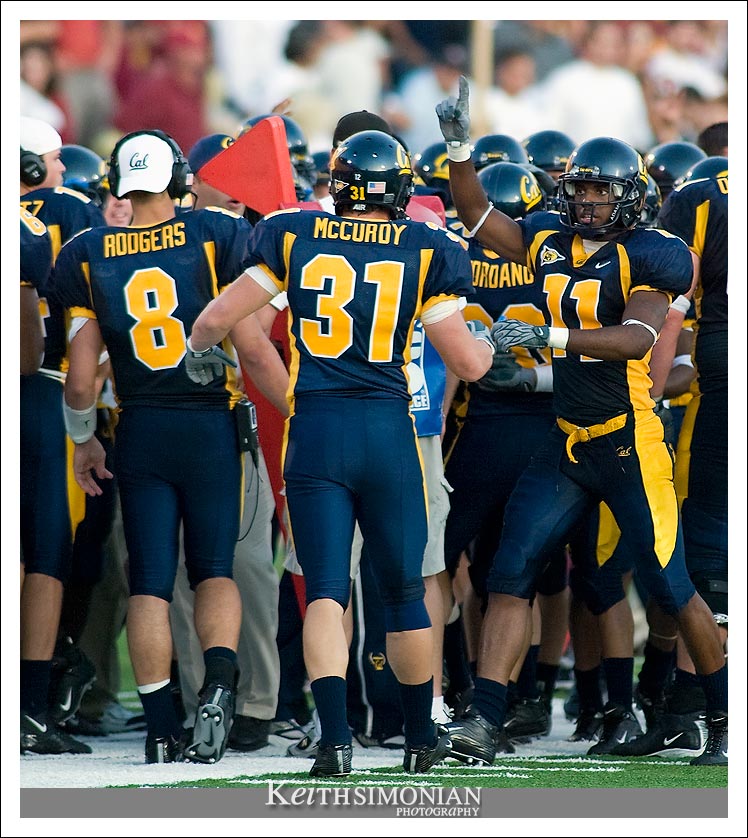