It was NFL draft day a little over 5 years and 8 months ago and things weren’t going as planned for Aaron Rodgers a junior from the University of California who had declared for the 2005 draft. He was expected to be the first or second quarterback taken in the draft, and certainly to be made one of the first 10 picks in the draft. Rodgers had played two seasons at Cal and had earned first team All-Pac-10 honors in 2004 with a stellar season that included completing 209 of 316 passes for 2,556 yards and 24 touchdowns. During his two years at quarterback Rodgers completed 424 of 665 passes ( 64%) for 5,469 yards and 43 touchdowns with only 13 interceptions.

The 2005 NFL draft started with the San Francisco 49ers selecting junior  Alex Smith of Utah as the first quarterback and very first pick in the draft. That seemed to be when things started to go wrong for Rodgers who had been projected to go early in the first round. He was the next highest rated QB on the board, and it now was a waiting game to see which team would selected him. It turned out to be a five hour wait for the Green Bay Packers to select him 24th in the draft.

Being picked by the Green Bay Packers meant that Rodgers would be Brett Favre’s backup for the foreseeable future. Rodgers would be the backup behind Favre for three seasons until what turned out to be one of many Brett Favre retirements. Last season as the starter Rodgers lead the Packers to an 11-5 record and a wild card playoff birth. The Packers lost in the first round to the Arizona Cardinals 51-45.

Once again for the 2010 season the Packers entered the playoffs as a wild card team, this time with an 10-6 record. The Rodgers lead Packers defeated the Philadelphia Eagles 21 to 16 in the opening round of the playoffs. Yesterday they traveled to Atlanta to play the Falcons and were victorious by a 48 to 21 margin. That win sets the Packers up to play the Chicago Bears in the NFC championship game on Sunday January 23rd at 3pm ET.

Rodgers questions a call during a 2004 game against UCLA. 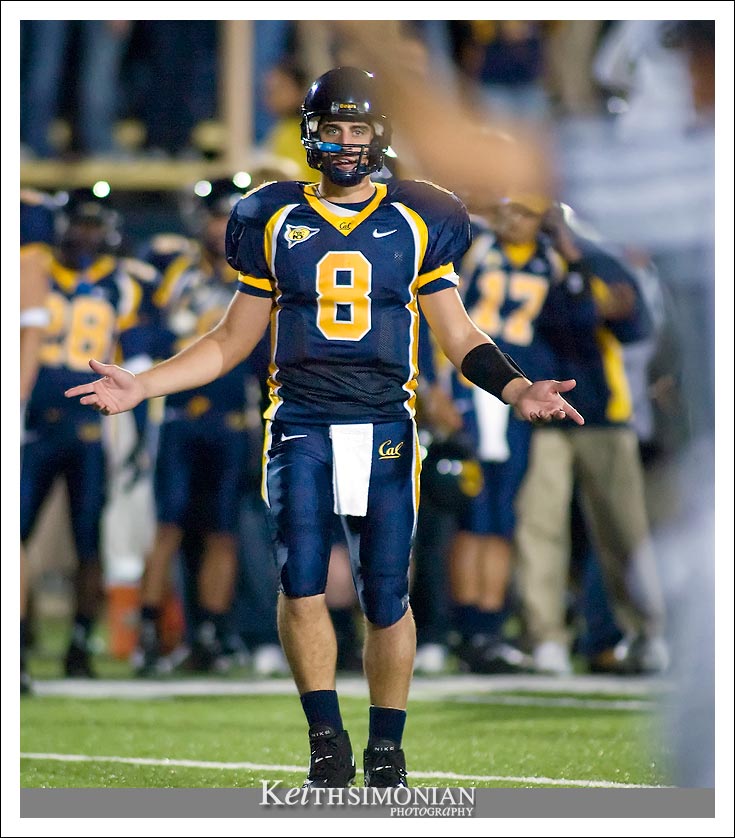 Rodgers runs down the sideline in this photo from the 2003 Big Game against Stanford. 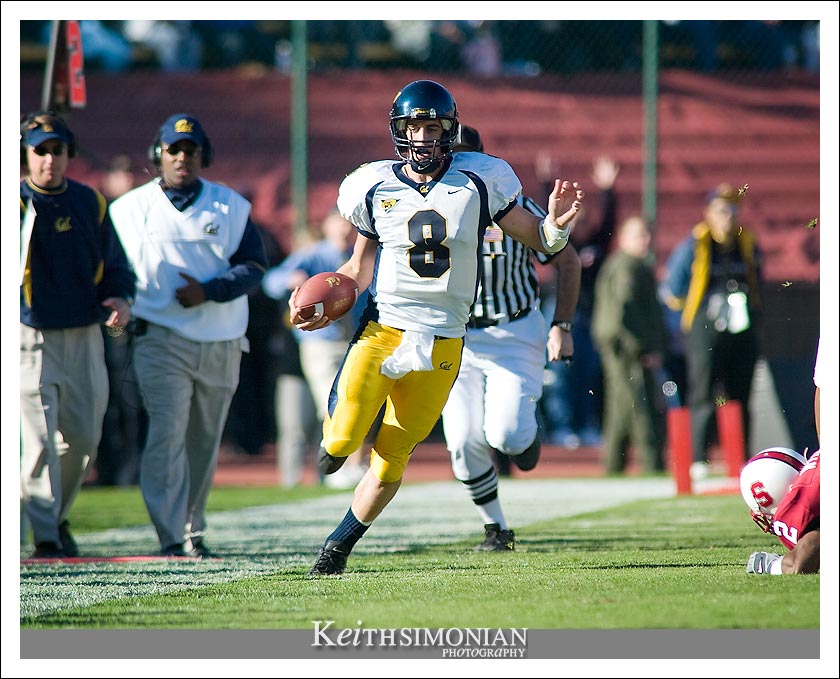 Update – Sunday January 23, 2011 – With their 21 to 14 win over the Chicago Bears in the NFC Championship game the Green Bay Packers will head to Super Bowl XLV which will be played in Cowboys Stadium near Dallas, Texas on February 6, 2011 to play the Pittsburgh Steelers who beat the New York Jets in the AFC Championship game 24 to 19.

The very next year California alumni Craig Morton was the starting quarterback for the Dallas Cowboys who were beaten by the Johnny Unitas lead Baltimore Colts in Superbowl V by a score of 37 to 27 on January 17, 1971.  Seven years later in 1978 Craig Morton was back in the Super Bowl but this time as the starting quarterback of the Denver Broncos. The Broncos were beaten by the Roger Staubach lead Dallas Cowboys 35 to 34.

Just two years later in Super Bowl XIII on January 20, 1980 California alum Vince Ferragamo  would lead the Los Angeles Rams against the Terry Bradshaw lead Pittsburgh Steelers in a game that the Steelers won 31 to 25.

Super Bowl XLV update: February 6, 2011 –  The Green Bay Packers defeated the Pittsburgh Steelers 31 to 25 to claim their 4th Lombardi trophy. Aaron Rodgers was named the games MVP after passing for 304 yards and three touchdown passes while completing 24 of 39 attempts.