After many NFL games the starting quarterbacks of each team seek each other out to exchange a few words. 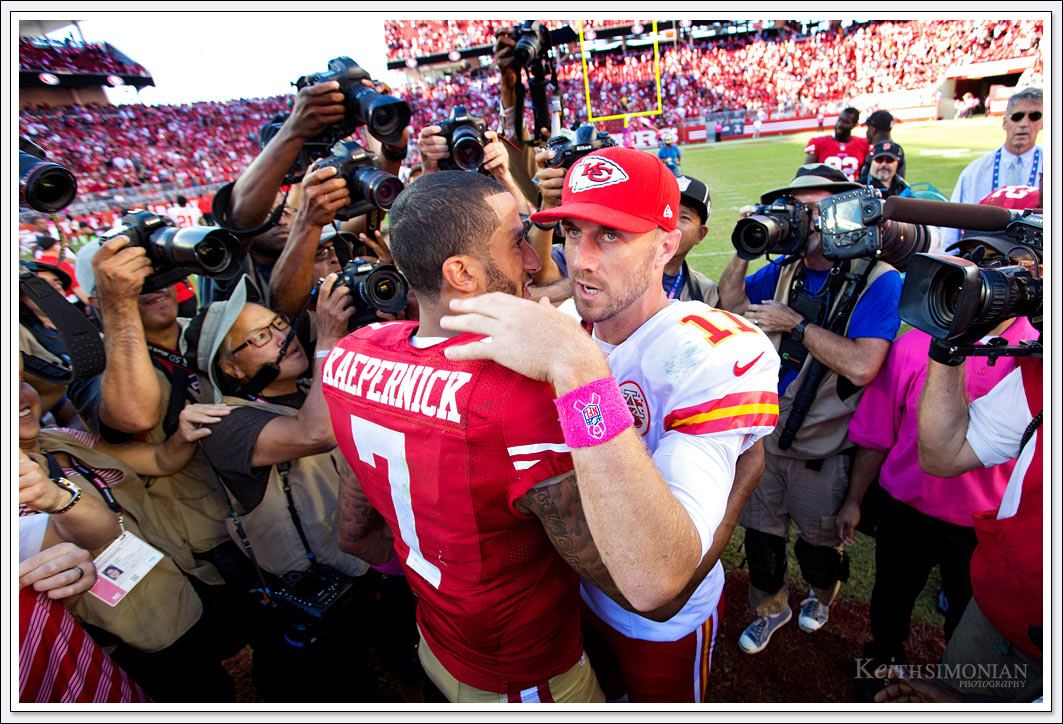 Normally it’s not much of a big deal. Judging by the number of cameras and photographers trying to capture this October 5, 2014 regular season meeting between Alex Smith of the Kansas City Chiefs and Colin Kaepernick of the San Francisco 49ers, this was a big deal.

Here’s the back story to the photo.

Alex Smith was drafted as the overall first pick in the NFL draft by the San Francisco 49ers. His 2005 through 2010 seasons were average at best. But, nobody ever said changing the offensive coordinator every year and having a below average head coach as happened to Alex Smith produces an MVP quarterback. That system sure didn’t work for Alex Smith.

Then in 2011 the San Francisco 49ers hired Jim Harbaugh from Stanford to be the head coach and everything changed for Alex Smith. Having a head coach that knew what he was doing and was able to tailor an offense to Smith’s strengths caused a huge improvement in Smith’s performance and the teams.

The 49ers were 6-10 in for the 2010 season and missed the playoffs and the coach was fired. The Forty Niners finished the 2011 regular season as the NFC West champions with a 13-3 record. Then in the playoffs, Alex Smith would lead the 49ers to victory over the New Orleans Saints 36-32 in what is described by an NFL analyst as the 3rd best Divisional Playoff game in history.

That same season the 49ers hosted the NFC championship game against the New York Giants. If it were not for a muffed punt in overtime by the 49ers they looked primed to win the game and head to the Super Bowl. Instead the Giants went to the Super Bowl and defeated Tom Brady and the New England Patriots.

On to the other person featured in the photo, Colin Kaepernick. In the 2011 NFL draft, the San Francisco 49ers traded up to pick Kaepernick of Nevada college 37th overall in the draft. Kaepernick was the was the 6th quarterback to be drafted when he was taken off the board. As the 2012 season rolled around, it was assumed he would back up Alex Smith. That’s just how it played out, until Alex Smith suffered a concussion against the St. Louis Rams in the 8th game of the season. That game would end in a 24-24 tie.

Colin Kaepernick would start and win the next two games against the New Orleans Saints and Chicago Bears while Alex Smith recovered from his concussion. With the 49ers facing the Rams in a rematch of 3 weeks earlier, head coach Jim Harbough announced that Colin Kaepernick would be the starting quarterback over a now healthy Alex Smith. So Smith who just one month before had been named NFC offensive player of the week for the first time in his career and who was having his best season ever in the NFL was out of a job.

Kaepernick would lead the team for the rest of the regular season and through the playoffs. The playoffs featured Kaepernick leading the 49ers to wins over the Green Bay Packers, Atlanta Falcons, and a loss in the Super Bowl to the Baltimore Ravens who were coached by Jim Harbaugh’s brother John Harbaugh.

The Super Bowl game in New Orleans at the Superdome was different than all others as there was a 22 minute power outage that caused a 34 minute delay in game play. Before the power outage the 49ers were outplayed and trailed 28 to 6. Once play resumed the 49ers scored 17 unanswered points and were poised to take the lead with a first down on the Ravens 7 yard line with 2 minutes remaining. After a run to the 5 yard line, the 49ers tried 3 unsuccessful passing plays that would lead to them losing the Super Bowl by 5 yards.

After the 2012 season ended, the 49ers traded Alex Smith to the Kansas City Chiefs for their 2nd round pick which would be the 34 overall pick in the 2012 draft. The 49ers would also get a conditional pick from the Chiefs in the 2013 NFL draft.

Colin Kaepernick would lead the Forty Niners during the 2013 season to a 12-4 regular season record. In the playoffs the 49ers would be beat the Green Bay Packers, Carolina Panthers, and then lose to the Seattle Seahawks in the NFC Championship game.

OK, all those games, playoffs, disappointments, and blackout led to this rematch of now starting quarterback Alex Smith for the Chiefs and Colin Kaepernick for the 49ers on October 5th, 2014 at the just opened Levi’s Stadium. The 49ers would win the game using a fake punt. After the game, as is normal, the starting quarterbacks meet and shake hands. As the photo shows, this wasn’t the normal meeting of quarters as every photographer was there to cover the moment with their wide angle lenses in hand to get up close and personal.

Most of the sideline photographers were trailing Kaepernick to capture the moment, I had been following Alex Smith out to the center of the field. I captured this moment with a 17-40 zoom lens at 17mm held above my head pointing down at the players pushing the shutter release button without being able to see exactly what was in the frame. A combination of skill, experience and luck allowed me to capture this moment.

The 49ers finished the 2014 season with an 8-8 record, and for the first time in 3 years they missed the playoffs where in each of those three years they reached the NFC Championship game. Jim Harbaugh was fired as head coach after completing the most successful regular season winning percentage by any coach in the salary cap era during his 4 years coaching the 49ers. Things went downhill for Kaepernick after that season as he was never again as an effective quarterback as during those playoff years. Then there was the 2016 kneeling protest year which effectively got him black balled from the NFL and led to him filing a grievance against the NFL owners for collusion.

Alex Smith during his stay in Kansas City lead the Chiefs to the playoffs three straight years but only managed one win and three loses. After the 2017 season Smith was traded to the Washington Redskins for their third-round pick and Redskins cornerback Kendall Fuller. The trade also rewarded Smith with a contract extension the included $70 million in guaranteed money that will cover his playing till he’s 38 years old.