Malaga, Spain was one of six ports of calls in Spain during out twenty-four day Mediterranean cruise. 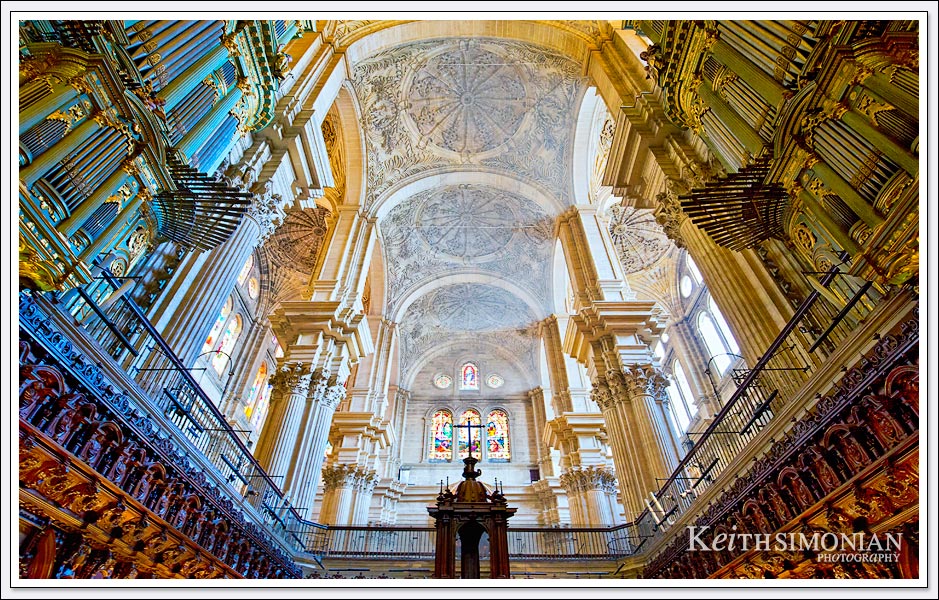 The amazing interior architecture of the Málaga Cathedral which was constructed between 1528 and 1782. 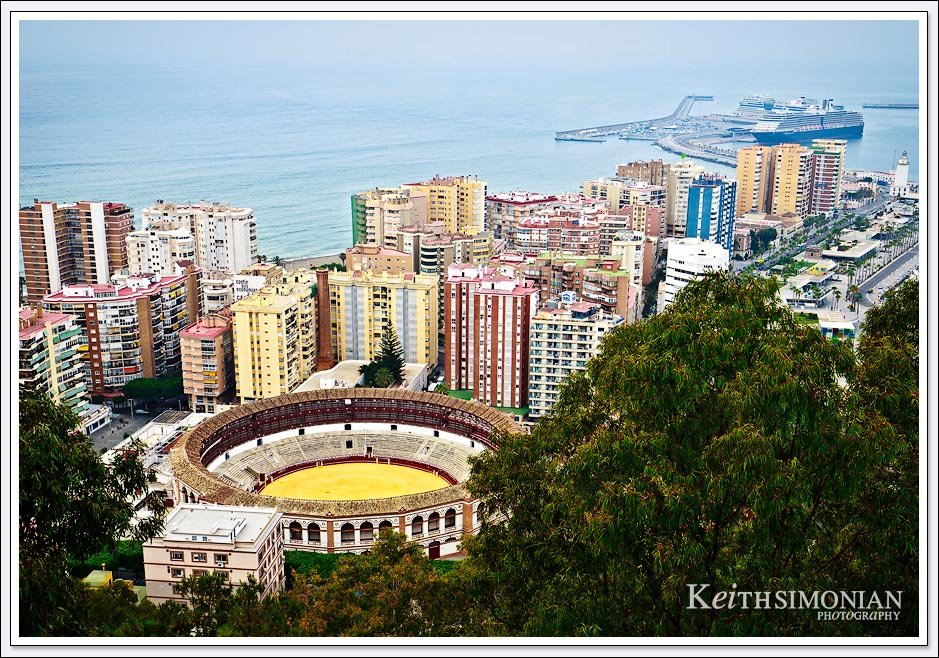 View of the cruise ship port and the La Malagueta Bullring surrounded by high rise apartment buildings. Our ship is the one with the dark hull. 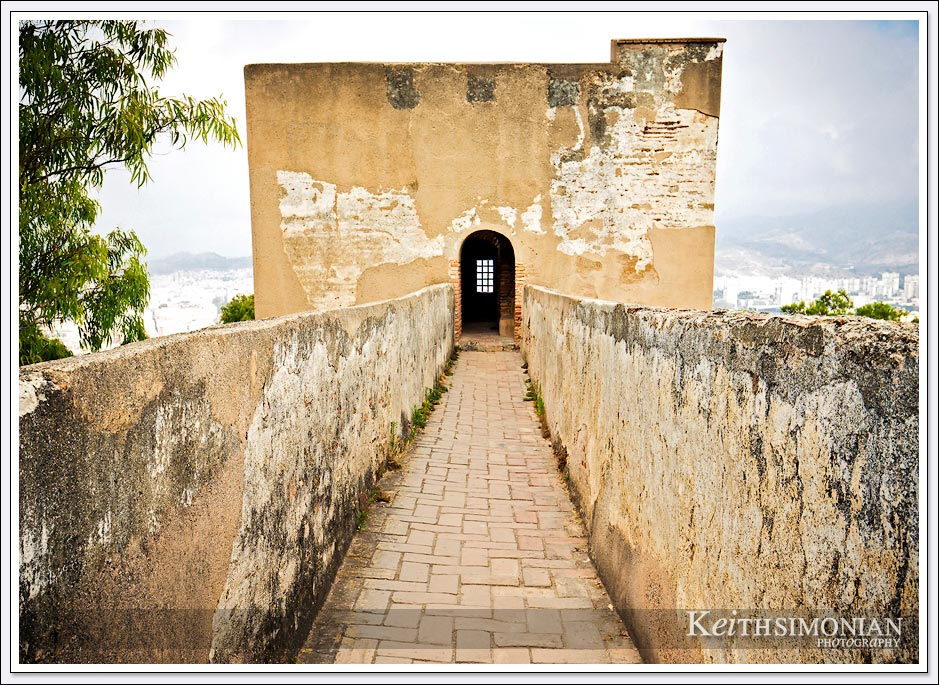 Located at the foot of Mount Gibralfaro the Alcazaba of Malaga was built between 1057 AD and 1063 AD. In Europe, if you had a nice port, you had to have a castle to defend it. 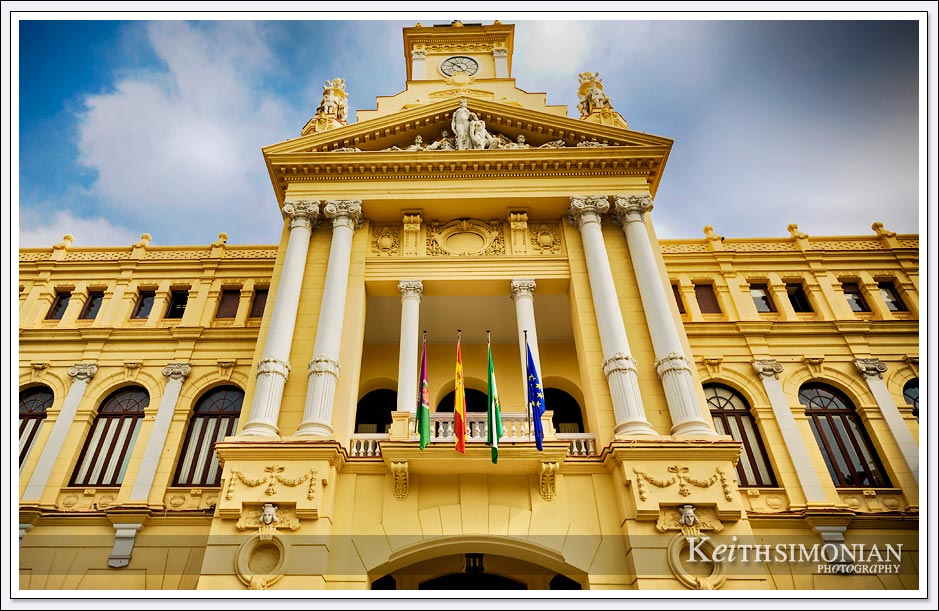 Málaga City Hall. And as City Hall buildings go, this one is pretty fancy looking 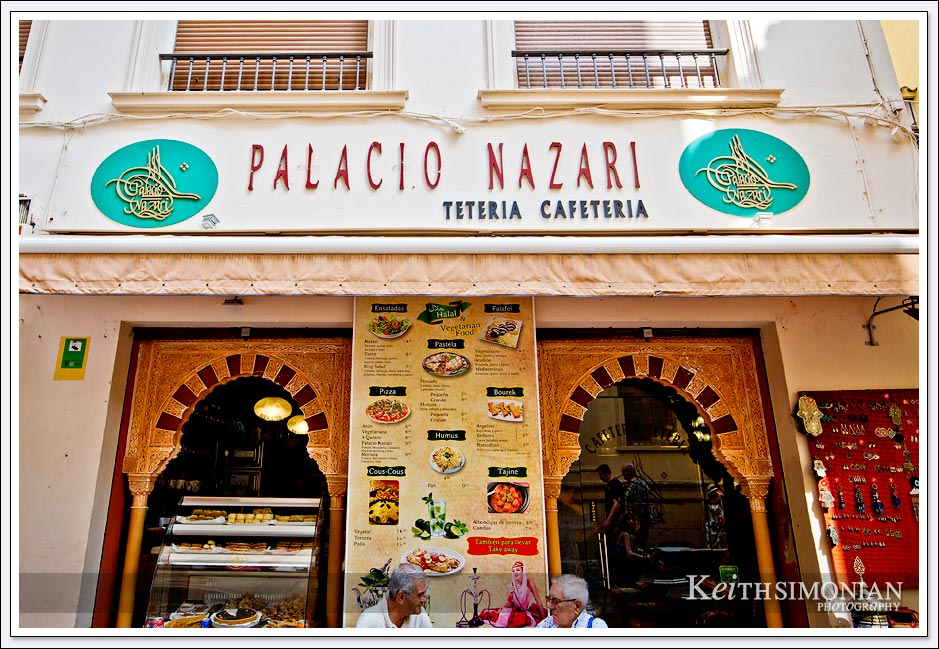 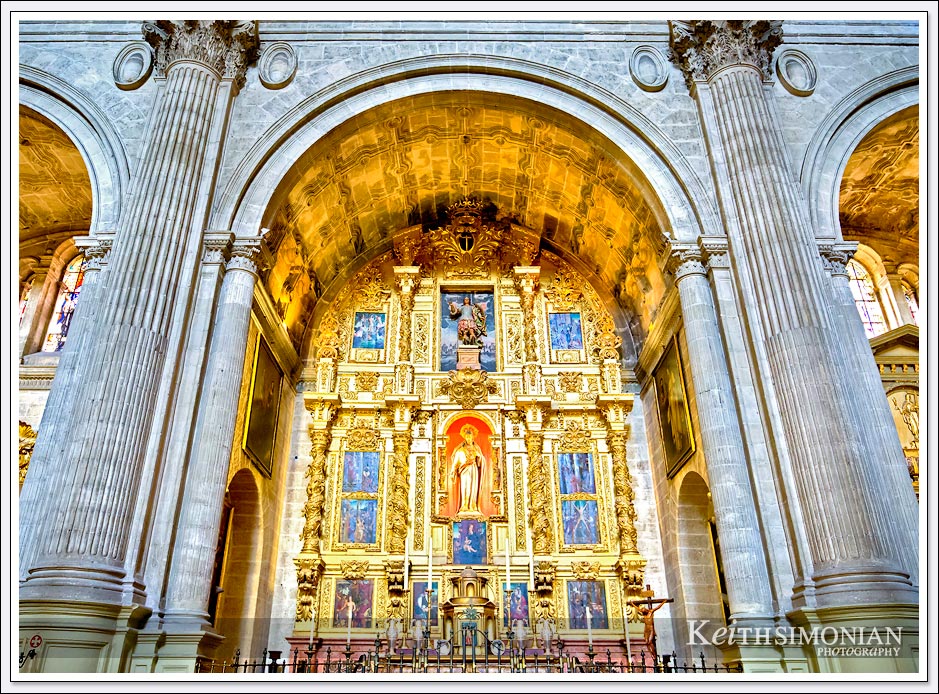 If my Google searching is correct, this is the Chapel of the Sacred Heart  in the Malaga Cathedral which depicts the life & martyrdom of Saint Pelayo in a series of eleven Renaissance paintings from the first third of the 16th century. 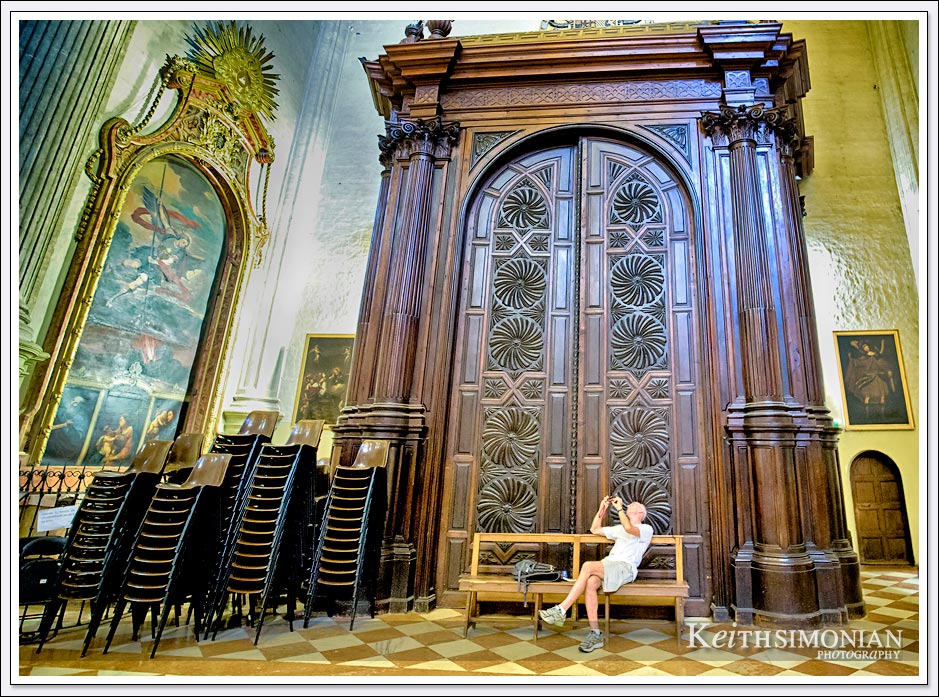 I’m  not sure if the gentlemen in the photo thought this was the best angle to capture the cathedral, or his just resting and decided to take a photo. 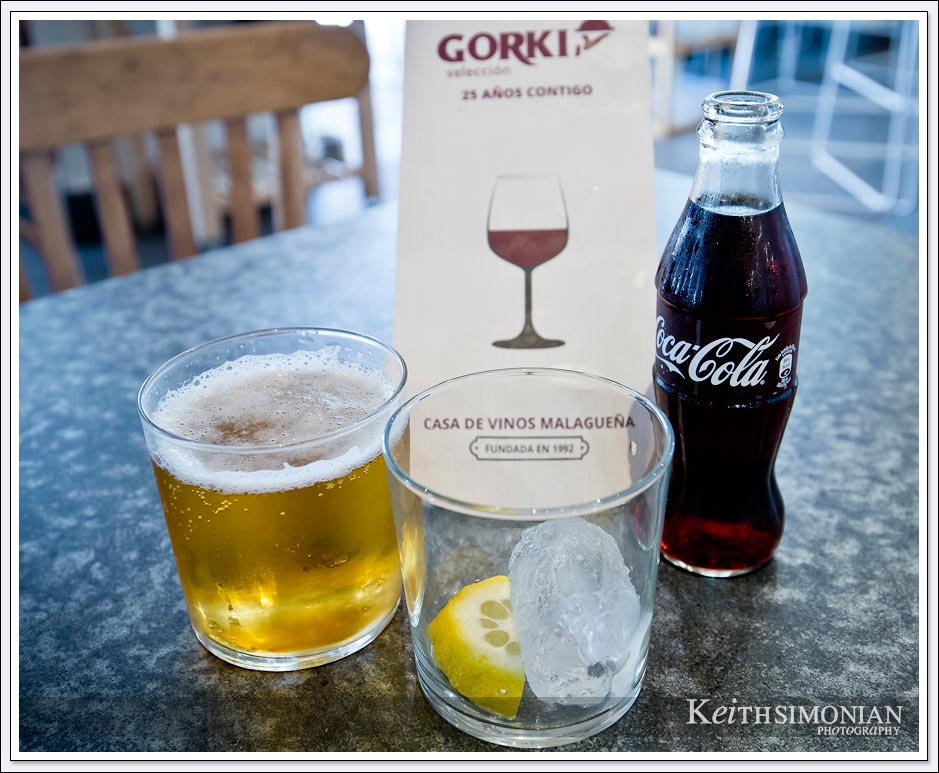 After the last stop of the ship’s excursion, we were given the choice of either taking the bus back to the ship, or taking the 30 minute walk through town back to the ship. Of course my wife and I choose the 30 minute walk in the heat and humidity. So as to cool off and relax a bit, we stopped at Gorki’s for some liquid refreshment. Two interesting points about this restaurant, one it’s no longer at the location we visited, and two, it featured the smallest restrooms in all of Europe. More on the new location of Gorki latter in the post. 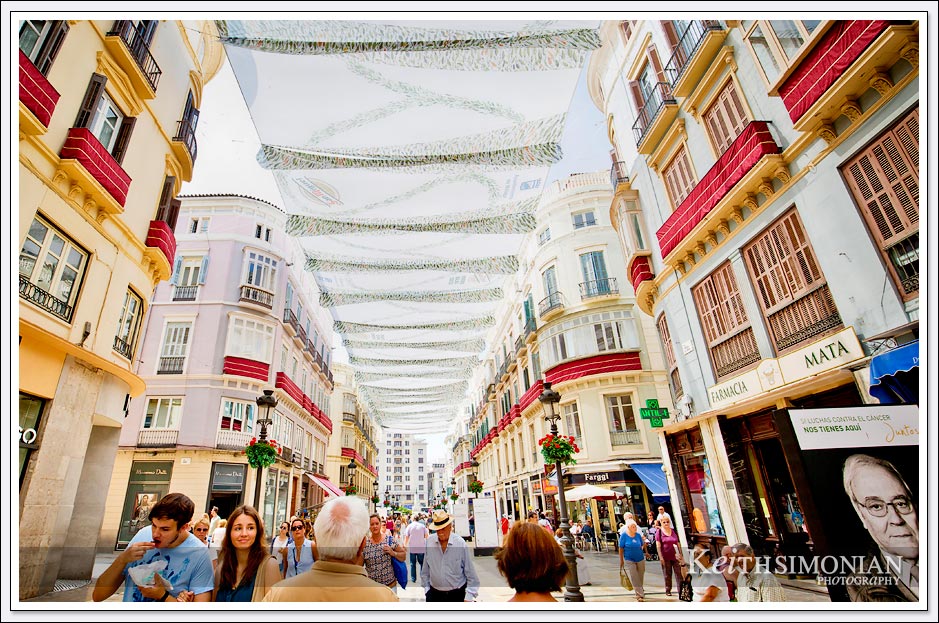 Shopping along the La Calle Larios. Not sure if the netting above the street was decorative or just providing some shade from the summer sun. 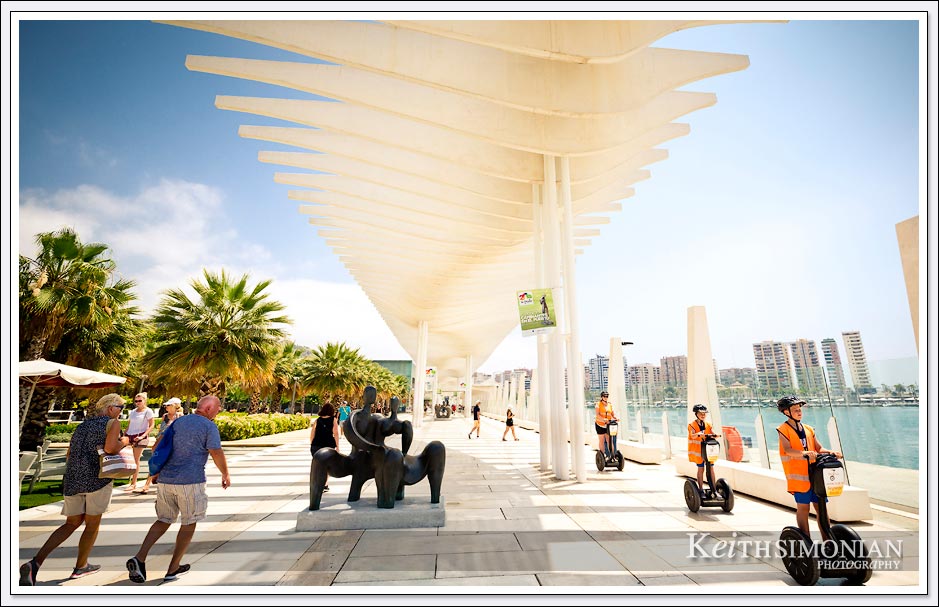 Walking back to the ship along the unique Palmeral de las Sorpresas  ( The Palm Garden of Surprises ). 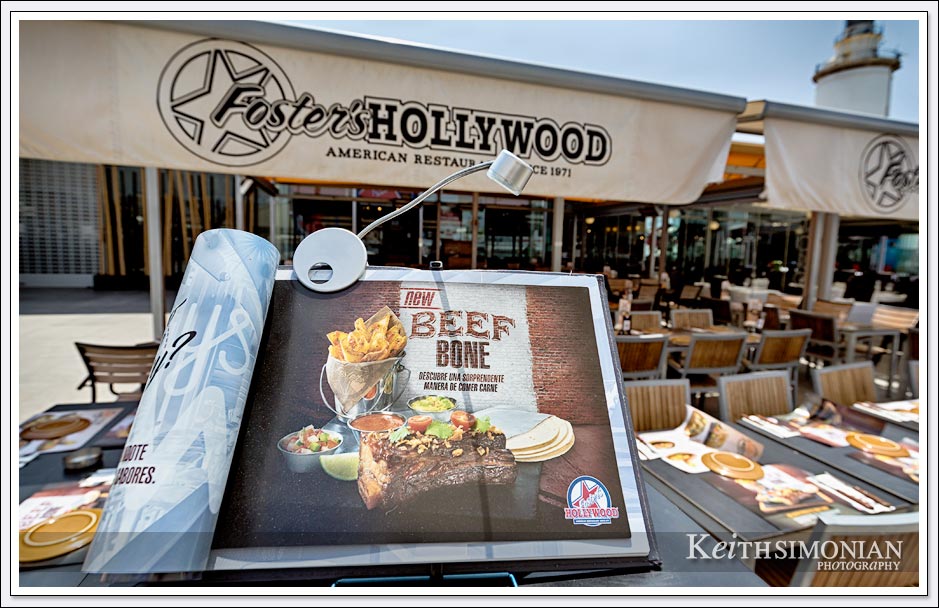 While doing the vast research required for the post, I wanted to check the walking distance from the Malaga Cathedral to the Holland America cruise ship that was our ride around Europe. One of the last photos I took before boarding the ship was of Foster’s Hollywood on the Muelle Uno. The strange thing was, Google was telling me it was no longer there on the waterfront, but only further inland. OK, restaurants open and close. I guess this was the case. But the other strange thing I found while searching Malaga was that Gorki’s restaurant which we did stop and eat at was not where is was suppose to be. It was far from the church, and very away from the waterfront. Well, when I found the current photos of Gorki’s on Google, it turns out it had taken over the spot Foster’s Hollywood had on the Muelle Uno.