The story about Jay Cutler’s retirement from the NFL broke about 10 days ago, so this post isn’t really breaking news. What this post does cover is some thoughts from Keith Simonian about the Bears visit to Levi’s stadium in 2014 in what would be the San Francisco 49ers first regular season game there.
The 49ers had played their last game at Candlestick, and now were playing their first regular season game on September 14, 2014 at Levi’s Stadium in Santa Clara, California. The 49ers had gone 12-4 during the 2013 NFL regular season, and then beaten both Green Bay Packers and the Carolina Panthers in away playoff games. In the NFC championship they traveled to Seattle where they lost to the Seahawks 23  to 17 in what was considered a battle of the two best teams in the NFL. Seattle would beat the Denver Broncos 43 to 8 in the Super Bowl to claim the NFL crown. On the other hand, the Bears had finished the 2013 with a lackluster 8 and 8 season. This season opener was set up so the 49ers could win the first regular season game there.

It didn’t turn out that way.

The 49ers lost to the Bears 28 to 20. It wasn’t suppose to happen that way. The 49ers had just come off a season opening road win against the Dallas Cowboys who would finish the season 12-4. Worse yet, the Bears would finish the 2014 season with a 5-11 record. Turns out a lot didn’t go according to plan for the 49ers during the 2014 regular season. The 49ers would finish the season 8 and 8 and out of the playoffs. Jim Harbaugh would be fired as coach with the with the 3rd best record of any NFL coach with more than 50 games, and as the winningest NFL coach in the salary cap era.

As of today, both starting Quarterbacks are out of the NFL. Jay Cutler retired after 11 NFL seasons and Colin Kaepernick is still looking for a team to join after being cut by the 49ers after the 2016 season.

Quarterback Jay Cutler was suppose to the be answer for the Chicago Bears. After eight seasons, it turns out he wasn’t.

Well that didn’t last long. The Miami Dolphins lost their starting quarterback with a non contact training camp knee injury that will put him out for the season. As the Dolphins were a playoff team last season and not wanting to waste this year, the starting quarterback solution became the very, very recently retired Jay Cutler.  Cutler’s one year deal is for  $10 million that with incentives could reach $13 million. Cutler will team up with now Dolphins head coach Adam Gase who was the Bear’s offensive coordinator during the 2015 season when Cutler had his highest passing rating. 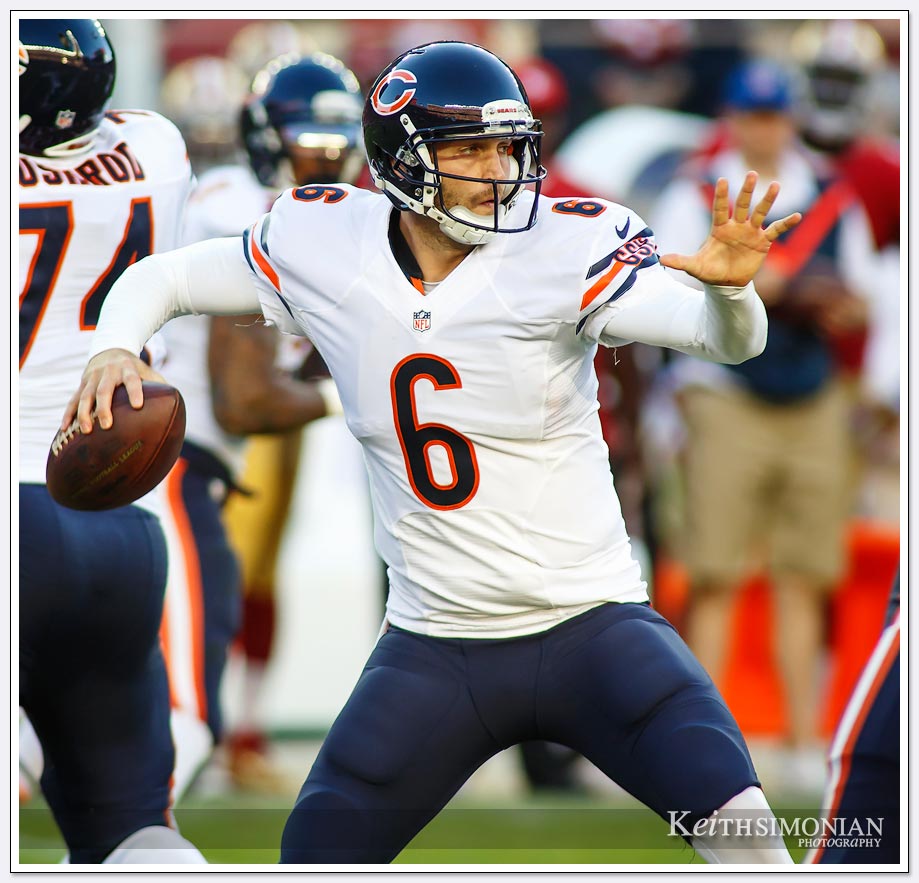 Before the game, the Boys Scouts brought out a very large flag for the playing of the National anthem. Jay Cutler just walked over and helped out. 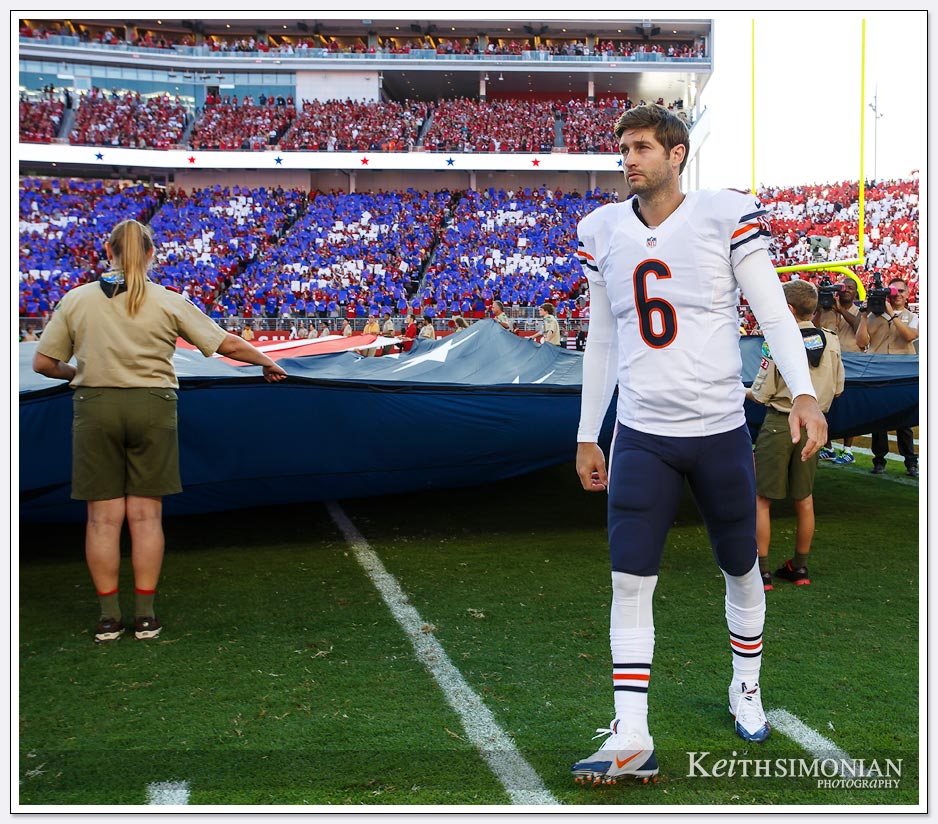 I’m going to make the assumption this was an incomplete pass. 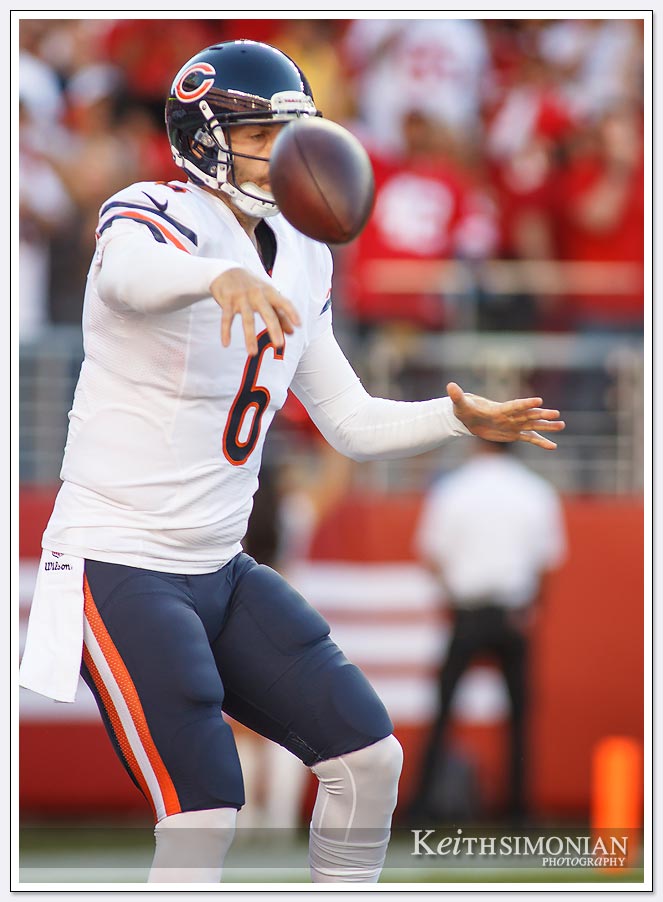 As this was the first and only time I photographer Jay Cutler, I took many photos of him and watched him many times after the play finished. I did notice he was very, very concerned about how his uniform looked after each play. I’ve never seen an NFL quarterback spend so much time making sure his jersey looked perfect. 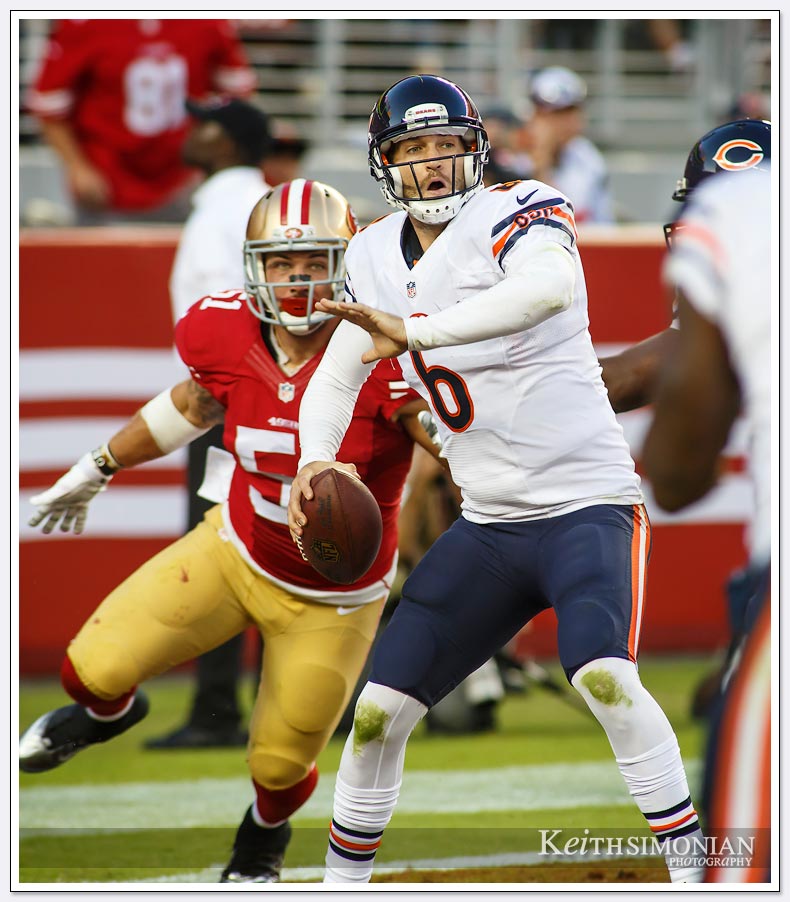 In all honesty, the 2014 season was the beginning of the end for Colin Kaepernick with the 49ers. 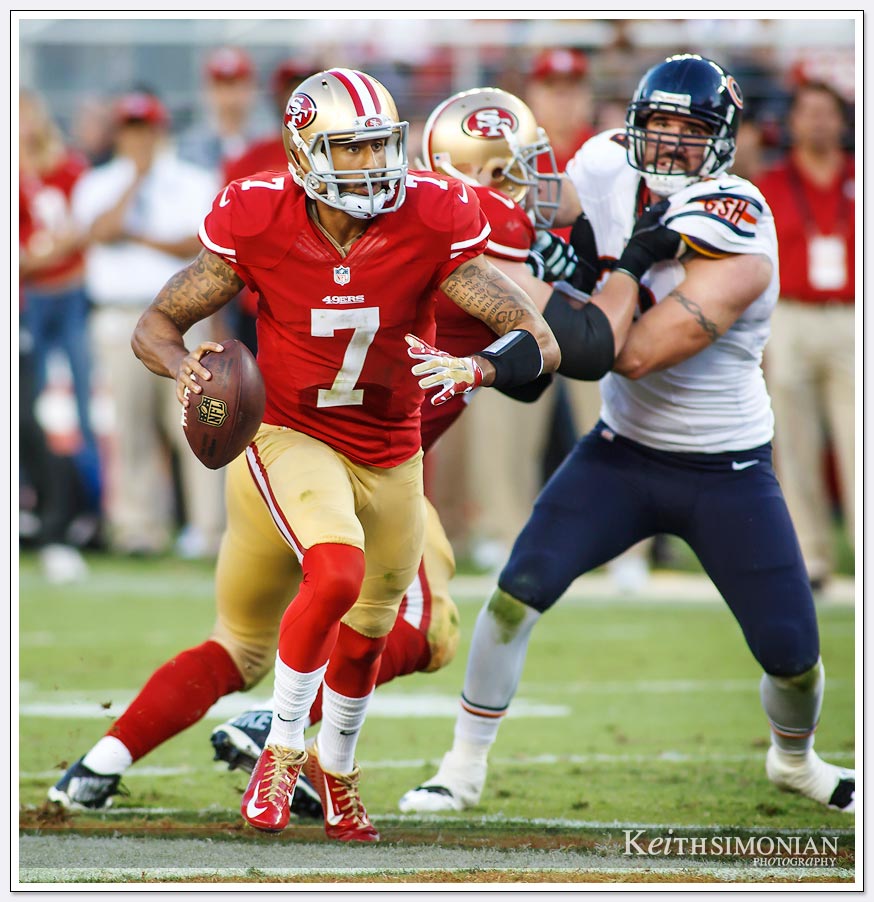