Junior running back from the University of California Marshawn Lynch. Cal’s #10 Marshawn Lynch was selected by the Buffalo Bills as the 12th player taken in this years 2007 NFL draft. The photo below is from Cal’s Big Game victory over Bay Area rival Stanford this past December. 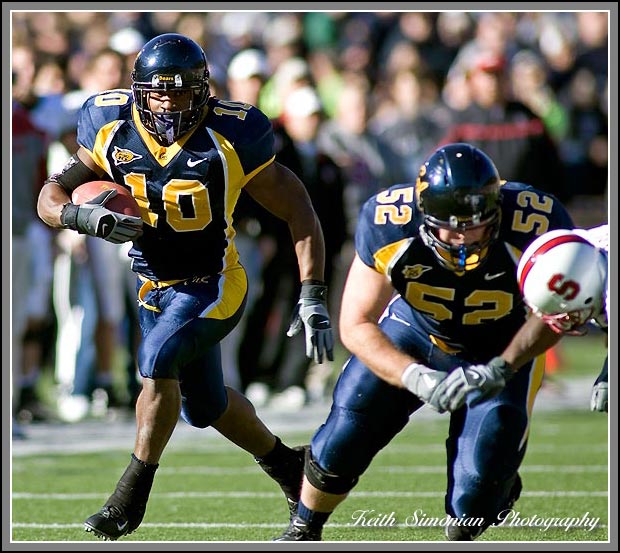 After 3 seasons and 4 games with the Buffalo Bills Marshawn Lynch was traded to the Seattle Seahawks on October 5th, 2010 for a fourth-round pick in the 2011 NFL draft and a conditional latter-round pick in 2012. During his 3 plus season with the Bills Lynch rushed for 2,765 yards and had 17 rushing touchdowns. Playing in 12 regular season games with the Seahawks Lynch rushed for 573 yards and 6 touchdowns on 165 carries.

The Seahawks finished the 2010 season as the NFC West division champions with a 7-9 record. They became the first team to claim a division title and enter the NFL playoffs with a losing record. As the lowest ranked division champion they hosted in the defending Super Bowl champion New Orleans Saints in the wild card weekend of the playoffs. The Seahawks entered the game as an 11 point underdog.

Late in the 4th quarter theÂ  Seahawks had the ball and were protecting a 34 to 30 lead when Marshawn Lynch ran for 67 yard touchdown that many are calling one of the greatest runs in playoff history. With 41 to 36 victory over the Saints, the Seahawks will play either the Atlanta Falcons or the Chicago Bears in the next round of the playoffs.