I recently read an article on CNN’s website about how Santorini Greece would be saved from tourism by the island’s wine industry. To be honest, the most interesting part of the article was the information on how many people visit the island each day by cruise ship, and how that number is now limited at 8,000. 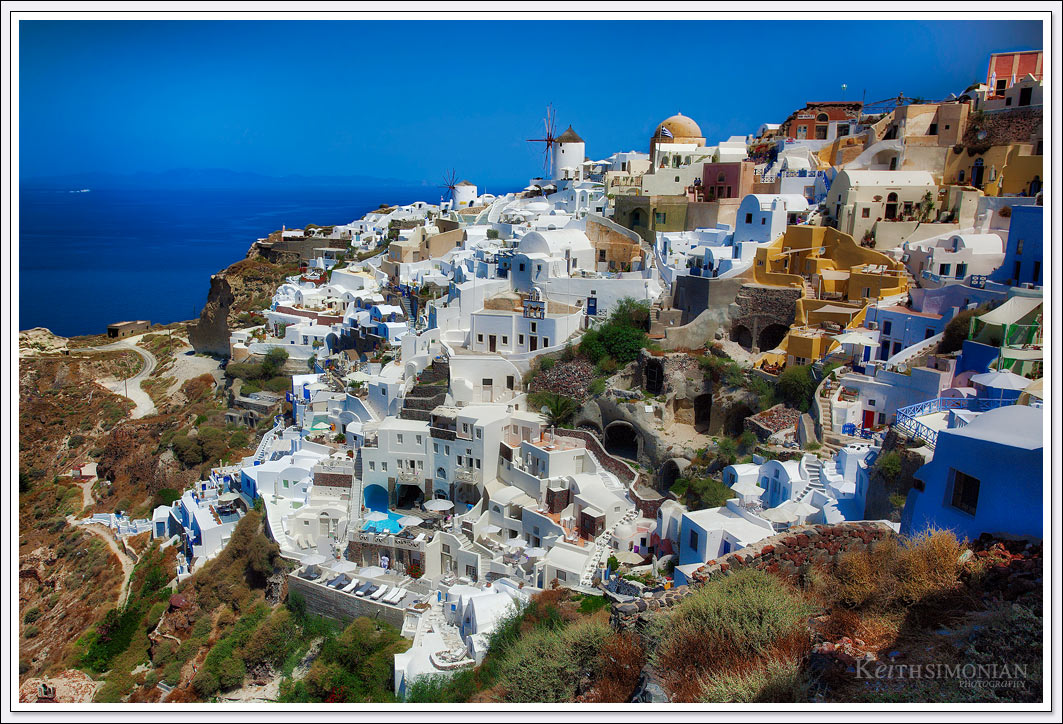 I visited the Greek island in the Aegean sea on June 15, 2015. That day there were three cruise ships in port, the Niña , the Pinta, and the Santa Maria. OK, obviously those ships weren’t in port that day. Had they been, the island would have been a whole lot less crowded as a google search revealed the ships had crews of 18, 18, and 52 respectively with no passengers.

Our ship, the Holland America cruise liner Zuiderdam holds 1964 guests with a crew of 842. After close examination of the photos I took showing the ships anchored in port, I was able to identify the other two ships. One was the Royal Caribbean Vision of the Sea which carries up to 2416 passengers, and the other ship being the Celestyal Crystal which has up to 1200 passenger per cruise.

OK, here’s the math. Possible passengers visiting the island would be 1964 + 2416 + 1200 = 5580. Crew are allowed to get off, but normally that number per ship would be at most 50 or so. Then not every passenger gets off the ship at every port. As this was tender stop, I would think not all got off their ships. Tenders aren’t fun.

From our ship there were two ways to visit the island. If you were taking a Holland America sponsored excursion, you were tendered off the ship and taken where the buses would meet you. Where buses met you was not where a tender from the ship would take those visiting the town on their own. If you visited the town on your own, you tendered from the ship and were taken to a landing spot a couple hundred yards from the Santorini Cable cars. You could take the cable cars up the hill, walk up the hill, or ride a donkey up the hill. From the top of the hill it was about two miles or so to the famous cliff side painted home and hotels that EVERYBODY visits. We took a city bus there.

It was certainly crowded there, but it was bearable. It was also hot. The buses from the cruise would also take all their visitors there. The “fun” started in the afternoon when trying to get back to the part of the island that had our tender location. The main problem was, everybody after spending the day seeing the sights wanted to get back to their ships at the same time. We were suppose to be on the ship by 5pm.

Cruise lines don’t play around with their boarding times. Many a time I’ve heard people being paged over the ships intercom after boarding time. The cruise line is trying to make sure you haven’t boarded and it wasn’t registered by their system. The ship will wait a little past boarding time, but by 30 minutes after, they are off to the next port. Turns out, time really is money.

There are several problems with the way Santorini deals with it’s daily tourist crush. The city bus line isn’t really meant to carry 1000’s of extra passengers for the several hours the tourists visit the island. There seems to be no plan for the crush of visitors trying to get back to their cruise liners in the afternoon. It’s great that the fare for the bus trip was 2 Euros or less, but how about charging 5 Euros and providing more buses. OK, enough of my suggestions on how to fix the bus and transportation problems of Santorini.

Once you have made it back to the top of the cable where you were dropped off, the next problem hits. In the morning everybody slowly get off their boats and the cable cars handle the number of riders with just a small delay. Now everybody is trying to get back to the ships at the same time and the cable car system can’t handle all the traffic. Adding to the number of visitors that rode the cable car up, are the cruise ship passengers that took a bus trip to visit the island. They are dropped off near the cable cars, and expect to ride it down to sea level where they can board their tender to their ship.

What was a 5 minute wait going up in the cool temperatures of the mourning becomes a 50 minute wait in the heat of the afternoon. It was a good 90 degrees that day, and when you factor in the high humidity, you get a lot of generally unhappy people. What many didn’t realize is that is is possible to walk down on the same trail/pavement the donkeys use. It’s about a 20 minute walk down the hill. Of course those that hadn’t ridden the cable up in the morning wanted to try it in the afternoon.

Long story short, we made it back to the ship before departure time, but our ship was still boarding passengers at 5:30 pm and we pulled up anchor and left around 6pm local time. It’s a good bet this happens every visit to the island. On our visit there were 5,300 or so visitors, I can’t imagine how crowded and uninviting the island would be with 9,000 cruise line visitors.