Last Friday was team picture day for the Oakland Athletics. Normally team picture day consists of arriving two hours before the shoot an then it’s an hour and a half of set up, 30 minutes of waiting, and then 5 minutes of excitement and stress for the 3:30pm team photo. This year’s photo was a little different than the last 13 times I’ve done the team picture. The team picture was moved from it’s normal Tuesday or Wednesday schedule to Friday. The reason for the switch being that Brad Pitt was in Oakland to film his new movie Moneyball, which chronicles the Oakland Athletics 2002 season and how the team’s GM Billy Beane built that team.

Upon arriving at the Oakland Alameda Coliseum the only thing that appeared out of the normal for a picture day was much of the lighting equipment used during the filming of the movie Moneyball ( to be released next summer ) was being packed up and hauled away. Since all the lighting equipment was outside the stadium it didn’t effect me or the team picture, or so I thought. Things proceeded as normal, that being drive down the ramp to center field, unpack the lighting and the bleachers and set up in the normal spot of shallow center field for the picture. By 3pm all the set up was done, it was now just time to wait for the players, managers, and staff to arrive for the photo.

Being that the team picture is photographed with the team back lit by the sun and flashed with powerful strobes as the main light, I usually check the strobes every so often just to make sure they work. Well at 3:10 something was wrong, the strobes that had fired just 10 minutes before weren’t working. There appeared to be no power getting to the power pack. OK, the first and most logical thing to do is check that the power cord is still plugged in both the outlet and into the power pack. OK, the cord is still plugged in both places. What else could be wrong? Maybe the outlet suddenly stop working. OK, try all the other outlets on this on the circuit. Nope, no luck there, no power. Next step, go to the truck and bring out one of the two backup power packs and plug it into the cord and hook up one of the lights checking to see if the original power pack has gone kaput. Nope, the backup isn’t working either. Next backup step is to pull out an extra power cord and plug the power pack into another outlet some 60 feet away.

Success, the backup power pack is now working correctly. I turn off the backup power back and once again hook up the strobes to the original power pack. It works just fine,  like it did 15 minutes ago, before the problem happened. Feeling just a little stressed by the last 5 minutes, I go over to my truck to grab a drink of water. While there I notice a technician now working on the junction box that the power cord was originally plugged into. When he finished working on the box, I asked him if the power had been turned off? He mentioned that movie production ( here’s where Brad Pitt fits into the story ) had used the junction box for electrical tie ins, and they were removing them all today. So of course the power had to be turned off for a while.

Now it all made sense. While on the field before any notice of the problem, my assistant and I watched another technician drive up to the location of the junction box which was out of our view, and then drive away a minute or so latter. It didn’t occur to me that he was turning off the power that both I and the Oakland A’s were counting on. OK, time to relax a little a get ready for the team picture. The team picture went of without a hitch, and you can see the result below. Had the young lad who originally turned off the power, done so during the 5 minutes the shoot lasted, there might not have been a happy ending to the whole day. 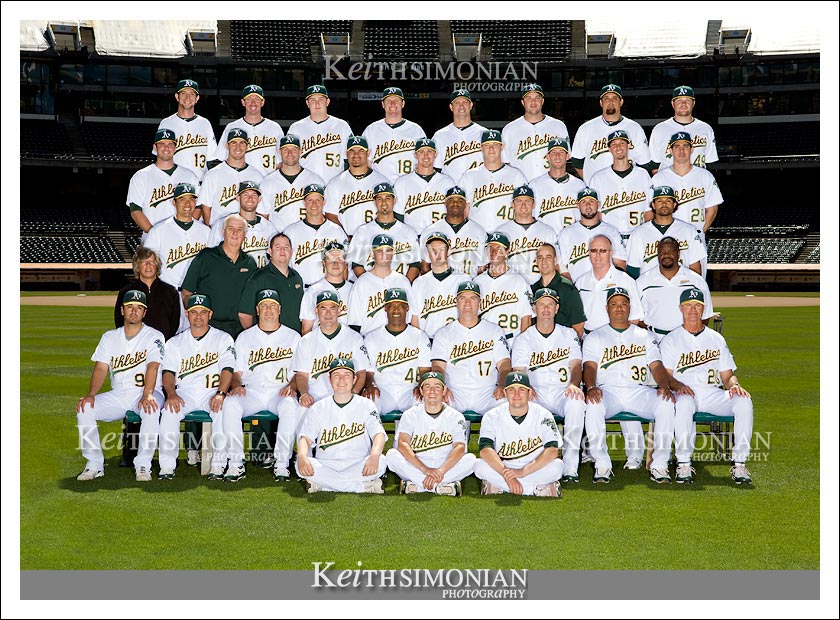 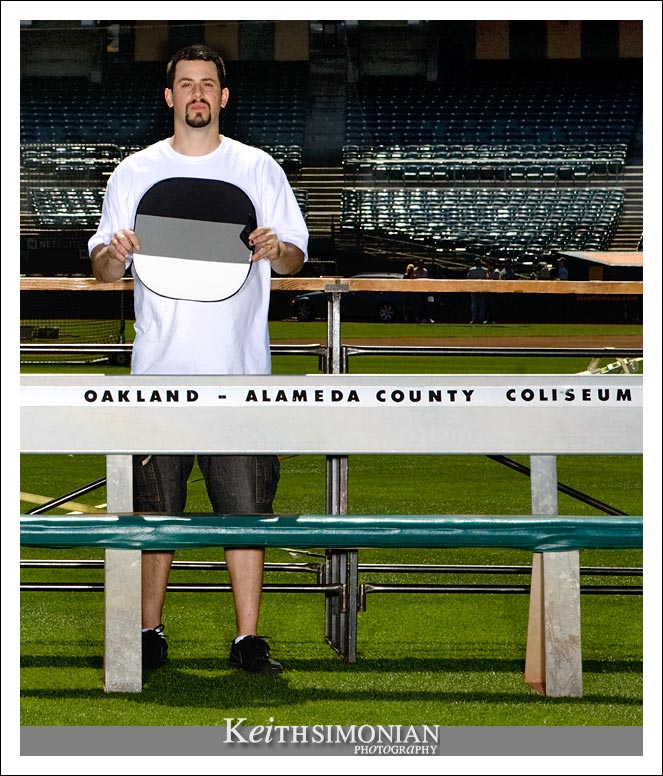 Movie update: The movie Moneyball which stars Brad Pitt, Philip Seymour Hoffman, Jonah Hill, Robin Wright, Kathryn Morris, and Chris Pratt is scheduled to be released on Friday September 23, 2011. The movie is based on the book Moneyball: The art of winning an unfair game, which was written by Michael Lewis. The screenplay was written by Steven Zaillian and Aaron Sorkin. The movie was directed by Bennett Miller and was produced by Columbia Pictures.

Glad to report the 2011 Oakland A’s team picture went off without a hitch as there were no complications from any movie productions this year.

On the subject of movie productions, the news is that Moneyball is set for a world premiere at Oakland’s historic Paramount theater on Monday September 19th with a 6pm show time. As earlier reported in this blog, the movie then opens for it’s regular release on Friday September 23rd. If you can’t wait till the 23rd, you can view the trailer which features Brad Pitt, Jonah Hill, and Philip Seymour Hoffman in Columbia Pictures release presented by Scott Rudin, Michael De Luca, and Rachael Horwitz here at Youtube.