I had been looking to buy a new larger hard drive to replace my current 5TB drive. The prices on the 8TB drives hadn’t dropped in the past year. The prices always dropped on hard drives. Not anymore. But then just a week ago I discover this thing called shucking a hard drive from an external mount and using it as internal hard drive. Suddenly I was able to get a 10TB drive in an external enclosure for $189 instead of a 8TB internal hard drive for $219. ( Note the 10TB drive is 5400RPM vs 8TB 7200 RPM ) Besides the cheaper price per TB, these Hard Drives are suppose to be Western Digital Red models which are meant for NAS storage solutions which involve much more demanding workloads put on the drive. In my case, this drive will just be for storage in my pc, and will sit at idle most of the time.

This drive was purchased on  June 4th, 2020 from Amazon as a WD Elements 10TB hard drive. The good news is that this version of the hard drive ( Model #WD101EMAZ ) didn’t require any 3.3v pin mod for it to work as internal drive. This drive was made in Thailand on January 12, 2020. I don’t know if that was a large production date or not, but the only other photo I could find on the internet of this model was also made in Thailand on Jan. 12th, 2020. 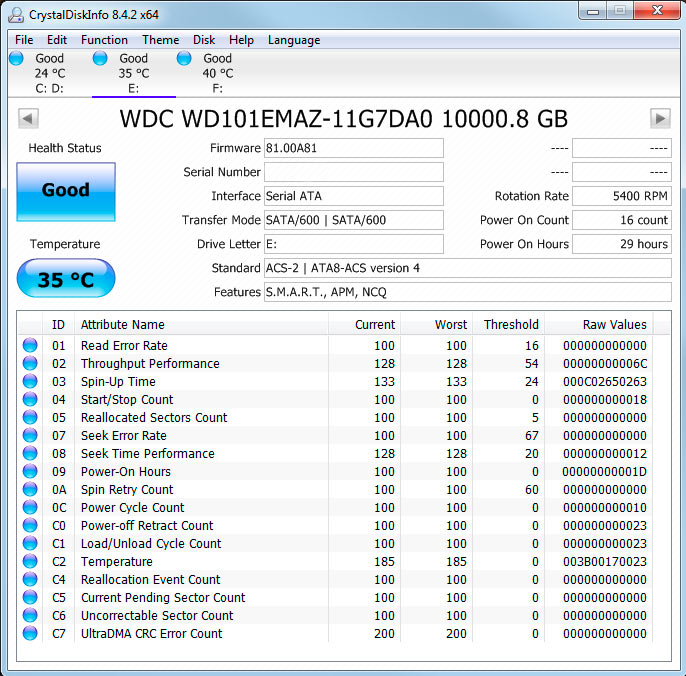 Using CrystalDiskInfo to monitor my hard drives, I’ve noticed the Western Digital 10TB running at 5400 RPM is constantly cooler than my HGST 6TB running at 7200 RPM. The other drive listed in the photo is an SSD.

The slightly old versions of the 10TB WD Elements came with hard drives with the model # WD100EMAZ. It has been suggested that the only difference between that older model and the newer # WD101EMAZ is the older version is Helium filled, while the new model is air filled. ( Helium filled is considered better )

It has been noted that the WD101EMAZ runs hot. I have not found this to be the problem. In several transfer/copy tests of a 24GB file, the 10TB WD101EMAZ never got above 39C, while my HGST 6TB 7200 RPM hard drive stayed around 42C during all the transfers. The transfer tests occurred in an HP PC now almost 5 years old with only CPU fan, GPU fan, Power Supply fan, and one case exhaust fan. Even though the 6TB drive has a higher RPM rate, it did not copy files any faster in my tests.

I purchased a new computer in October of 2020 with a Quiet One case. That new computer wasn’t put in the location of the old one ( at ground level in a computer storage slot ), but at ear level three feet from where I sit. At first I thought the noise I was hearing from the computer was an improperly installed cooling system. But what I was hearing were the two 10TB hard drives. Some testing revealed the drives weren’t any louder than most hard drives. The only non SSD drive I found that was pretty quiet was the Western Digital WD40EZRX.