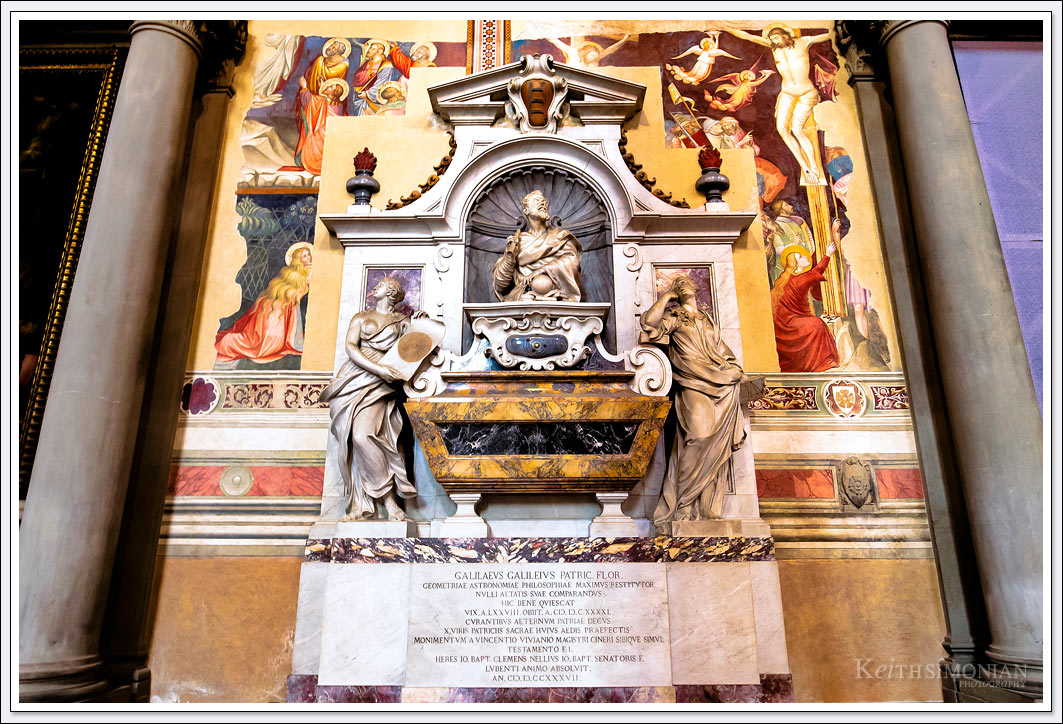 While certainly not the most famous church in Florence, the most famous and most visited Il Duomo di Firenze , in my humble opinion a visit to the Santa Croce church over the Florence Cathedral is a much better use of ones time.

After 23 days traveling around many of Europe’s ports, this day would begin with our Holland America cruise ship docking in the port of Livorno, Italy. From there we would take a tour bus purchased from the ship for the hour and a half to one hour and 45 minute drive to Florence. We would then be allotted about five and half hours to visit the city as we pleased.

The first part of our plan required us to find the location where we would pick up our already payed for FirenzeCard that allowed priority access to many of the most visited locations in Florence. With the help of some friendly policeman we were able to find the location in a little more than the time we allotted. That’s when the first hiccup in our “master plan” occurred. The Firenze Card allowed you to skip the main line to climb the more than 400 steps to the top of the Duomo. Turns out we weren’t the only people in Florence with that plan, and the next available times were the next day when we would be long gone.

Duke and Duchess of Urbino by Piero della Francesca

During our earlier wondering looking for the shop that had our Firenze Card we passed by the Uffizi Gallery and noticed quite a line. Since that was on our list of places to visit, we headed there next hoping to beat the crowds. The FirenzeCard did the trick and we avoided the main line and were inside and through security in under 10 minutes. 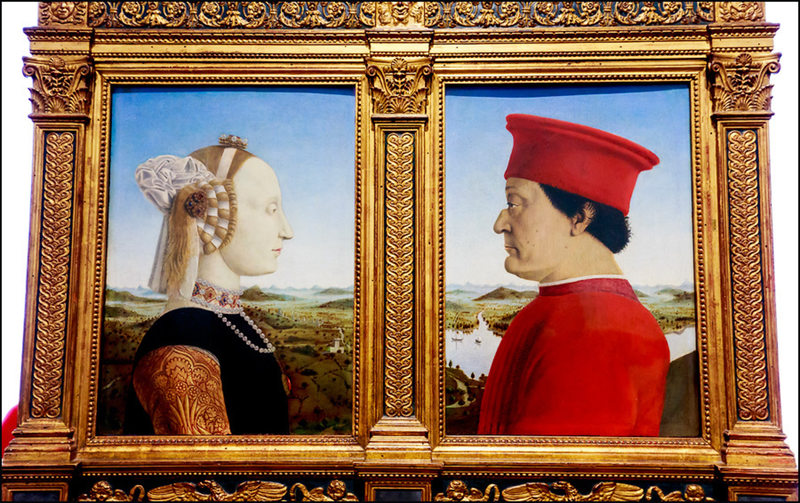 The Uffizi Gallery is world renowned for it’s many art works and paintings. So of course we toured the entire building and exhibits in one hour and ten minutes because our time was quite limited. As we left the gallery around 12 noon the what would be 95 degree heat, 60% humidity and all the walking had taken a toll. With no time to eat as we now only had 3 hours and 15 before returning to our randevu point. I spotted a 7-11 just outside the museum and grabbed some water and a sugar drink and it was off for the rest of our trek. No, there wasn’t a 7-11 convenience store just outside the Uffizi in Florence, Italy. I was just checking to see if you the reader was paying attention. I did find a small store on the was to our next destination, and did water and fuel up.

The next stop on the world wind tour of Florence would the Accademia Gallery to see Michelangelo’s statue of David. In all honesty, the only reason anybody waits in line to get into the Accademia is to see the David. It truly is the main and only attraction.

On our way Academy Gallery we passed by Cathedral of Santa Marie del Fiore which is the church for the Duomo. There is no admission charge, but there is usually a long line to get in. The line wasn’t very long, so we decided to see this famous church. Let me first say I’ve seen many impressive Italian churches. This was not an impressive Italian church. It was big and plain and not worth waiting 15 minutes to view when you have a limited time. Sorry, but that’s my harsh but factual opinion.

This view of the Michelangelo statue the David would give one the impression it’s just you viewing one of the greatest art works in the history of mankind. Nope. It’s a 15 minutes wait just to get into the Gallery and through security with the FirenzeCard, then it’s wait your turn to get close enough to the statue to create an unobstructed view while others a taking selfies all around you. 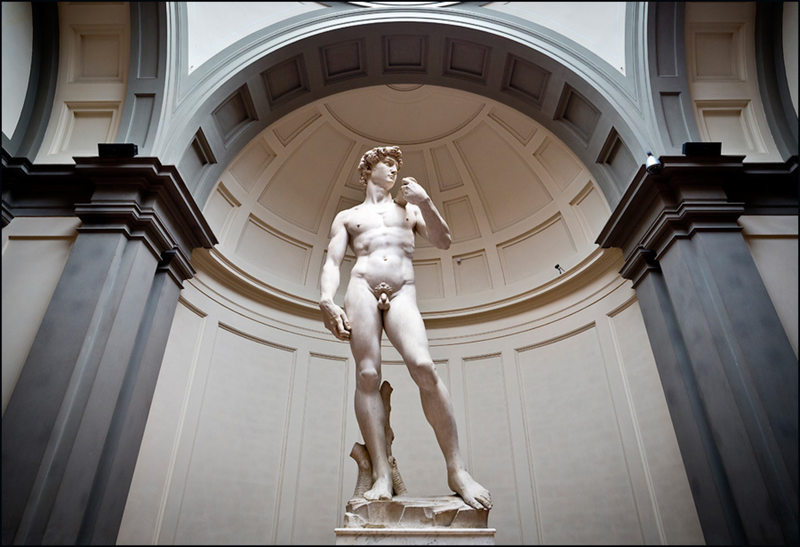 The last major site we had planned to visit was the Petti Palace which was across the Arno river. But that visit will have to happen some other day if we ever visit Florence again as our time was just to short to make the trek and spend an hour there. We were able to visit the famous Ponte Vecchio bridge which crossed the Arno river. While the Ponte Vecchio bridge is listed on many lists of the world’s most famous bridges, it certainly won’t leave you awe struck such as when you visit the most famous bridge in the world.

The upside to visiting the bridge was that it got my wife and I to the Arno river which we were able to use as a guide to reach the Piazza di Santa Croce and the Santa Croce church which was our meeting 3:15 pm meeting point.

Now that you’ve read about everything that was visited and eaten, it’s time to hear about the details of my visit to the Santa Croce church and the tomb of Galileo. After finding more to drink in the Piazza di Santa Croce, my wife and I sat down on the shaded steps of the Basilica di Santa Croce to wait the 20 minutes before our tour guide took our group back to the bus pickup about a half mile away. You really don’t want to be late for a 1.5 hour bus ride back to your cruise ship. The ship will leave without you. Having said that, one couple did arrive back to the meeting spot about 8 to 9 minutes late. The tour guide waited to make sure all were back, but I don’t know how long they would have waited as there is a schedule to be kept.

While bringing us to the drop off spot, the tour guide mentioned Santa Croce was a smaller church and may require a fee to get in. What she didn’t mention was that this church was the resting place of two of the most famous and important people in the history of the world. That certainly seems like a detail one would give out when ones job is to blather on about all the history and details. Oh, well.

As I noticed a slow trickle of people entering the church, I went over to the pay entrance to see if my FirenzeCard would get me free entrance. It’s not really free, as you pay about 70 Euros for the card, and it gets you entrance into about 72 sites over the course of 3 days. The good news was that Santa Croce was included among the many sites the card covers.

I checked back with my wife to see if she would interested in one more excursion. Nope was the answer. That wasn’t so unexpected at this was the 23rd day of the cruise, and the 27th day of the trip. So I headed into the church to capture as many photos as possible in the 15 minutes that would safely get me back to the meeting spot. I quickly photographed anything and everything that looked interesting and made it back outside in plenty of time to join the others waiting for transport back to our Holland America ship the Westerdam waiting for us in Livorno.

The next day was the last day of the journey, and we disembarked the ship at 7:30 AM on our way to Leonardo da Vinci–Fiumicino Airport for our flight to Heathrow Airport which is just outside of London, England. After our transfer there, it was on to Chicago O’Hare International Airport. The final transfer there would get us on a plane home to San Francisco International airport.

A couple weeks after the trip I began the process of sorting through the almost 8,000 photos I took during the trip to create another of my Award Winning 8K Slide Shows. As this was to only be the short 10 minute version, I just needed one photo from Santa Croce Basilica to represent the church. I selected the photo of Galileo Galilei’s tomb not knowing that’s who it was, but because I thought is was the best photo from the church. As I try to identify as much as possible in the slide show, it was over to Google to find out what/whom the photo was. To my surprise, it was the tomb of Galileo, the man who discoveries further proved the Earth was not the center of the Universe. When I went about creating the long version of my slide show, I selected another photo that I thought looked good. I was again amazed to see that this photo was the tomb of Michelangelo Buonarroti, or he’s more commonly known, Michelangelo. By accident, and sheer will power, I had visited the church in Florence Italy that was the final resting place of Michelangelo and Galileo.