The San Francisco 49ers only play the New England Patriots once every four years during the regular season because of the rotation set up by the NFL. 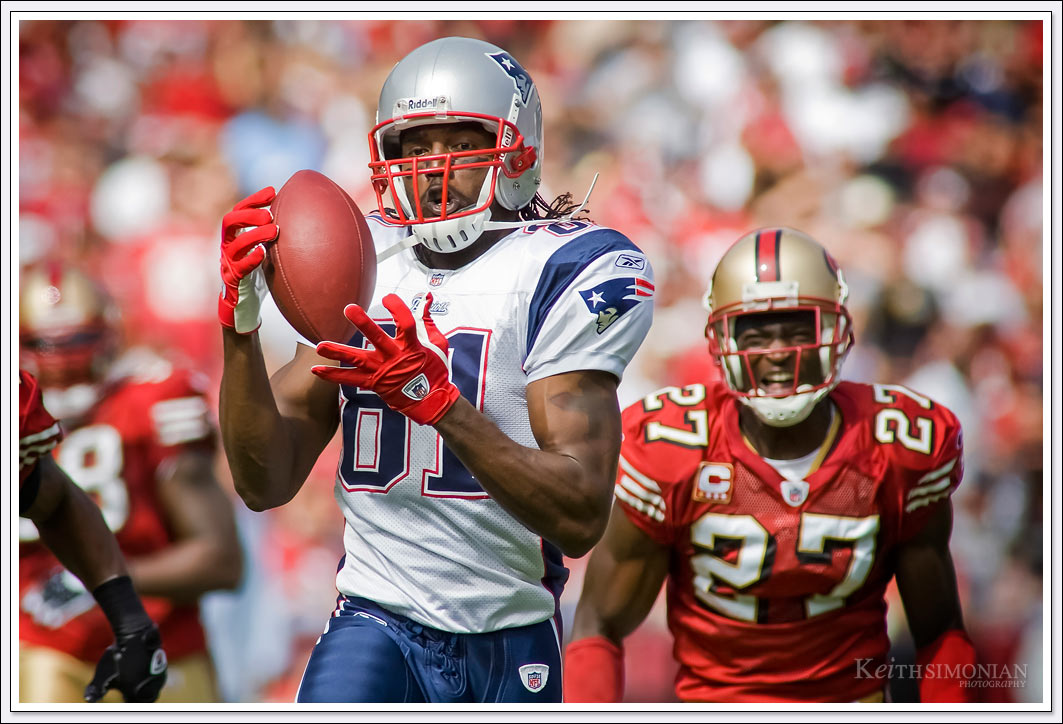 Then that game rotates between home and away, so a home game for the 49ers against the Patriots can happen only once every eight years. 2008 was the year that New England made it’s trip to Candlestick Park. Yes it’s an NFL game and anything can happen, but at the time the 49ers were struggling and the main reason to photograph the game would be Hall of Fame bound New England Patriot Quarterback Tom Brady. Only one problem, Tom Brady was injured and not playing.

Ok, you ask, who was the New England quarterback during that October 5th, 2008 meeting? That would be Matt Cassel. Sorry Matt, but the NFL Hall of Fame isn’t in your future.

Enough about who wasn’t the quarterback at this game and on to how this image was made. The go to lens for most sideline photographers at a NFL game is the 400mm f/2.8. It seems there is about a 50 – 50 split between the photographers using either Nikon or Canon cameras. As both companies make this lens, that’s what everybody brings.

The Patriots were on their on own 30 yard line and as I was shooting from the 49ers end zone. I was about 85 yards away from the play when it started. ( I wish I had remembered all this detail, but I Googled the game and saw a reply of this play )
Being 85 yards from the action I had added a 1.4 tele-converter that increases the reach of the 400 lens while cutting the light reaching the camera. Long story short, the 400mm lens, is now effectively a 560mm lens.

Randy Moss streaked deep up the middle and Patriots quarterback unloaded a 50 yards pass that Moss would catch over his shoulder on the 49ers 20 yard line. As he a beat the coverage, he would run in for a 66 yard touchdown reception.

Here’s the tricky part for me. Randy Moss caught the ball about 35 yards from me. With the 1.4 converter on the 400mm lens, it was a very tight photograph and the lens many times has a hard time focusing quickly with the converter in such a situation. Not that day though.

I ended up full frame image of Wide Receiver Randy Moss juggling the football on a touchdown pass. So that day I didn’t get any photos of the quarterback who’s going into the National Football League Hall of Fame, but instead I got a great image of the wide receiver that will join the Hall of Fame.