They 49ers were 6-10 last season, headed nowhere, and had fired their head coach Mike Singletary. One of the biggest turnarounds in NFL history started in January of 2011 when the San Francisco 49ers hired Jim Harbaugh. The team completed a 13-3 regular season, and defeated the New Orleans Saints in the Divisional round of the playoffs. They will host the New York Giants on Sunday January 22nd at Candlestick park to determine the NFC representative in the 2012 Super Bowl played Lucas Oil stadium Indianapolis Indiana on February 5, 2012.

What no quarterback in the NFL wants to see – 49er Defensive Tackle Justin Smith leaping over offensive lineman. 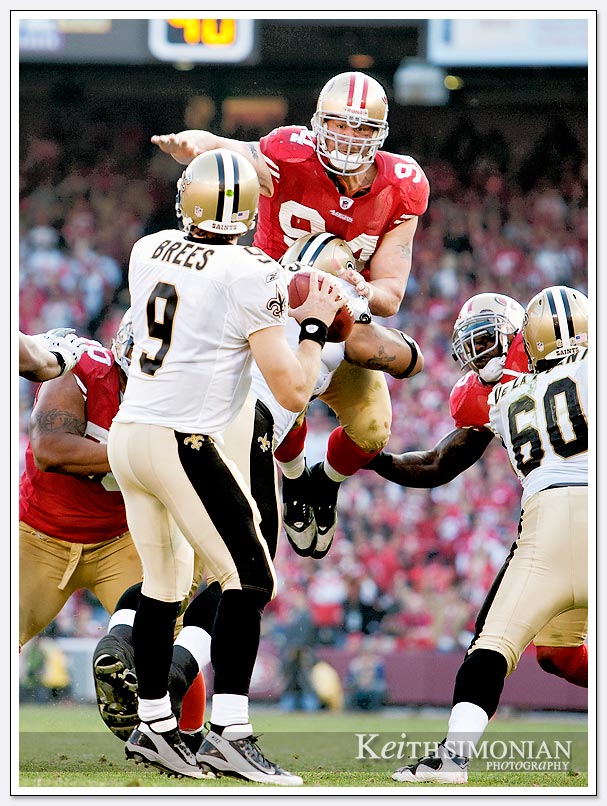 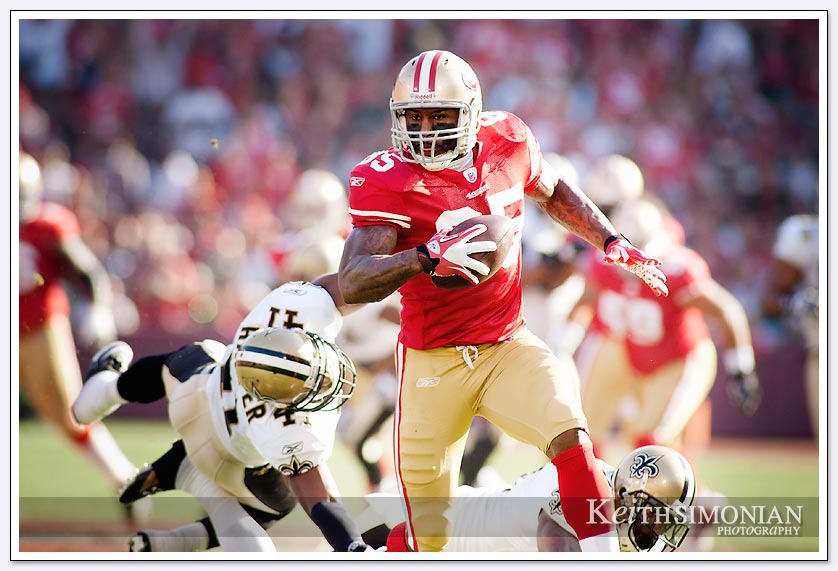 It’s not holding if they don’t call it. They didn’t. 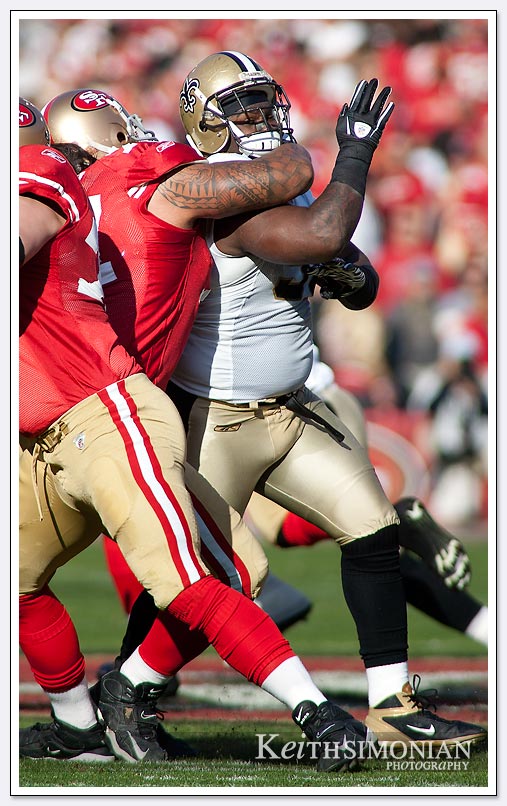 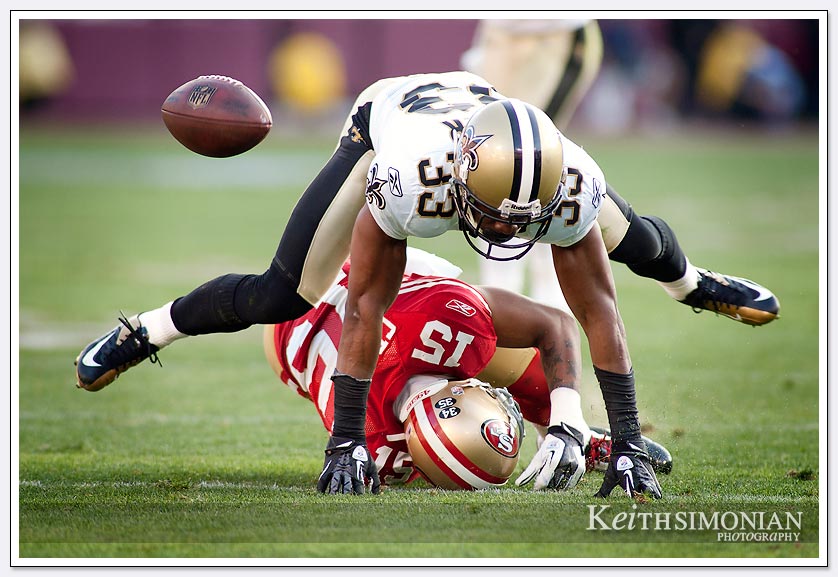 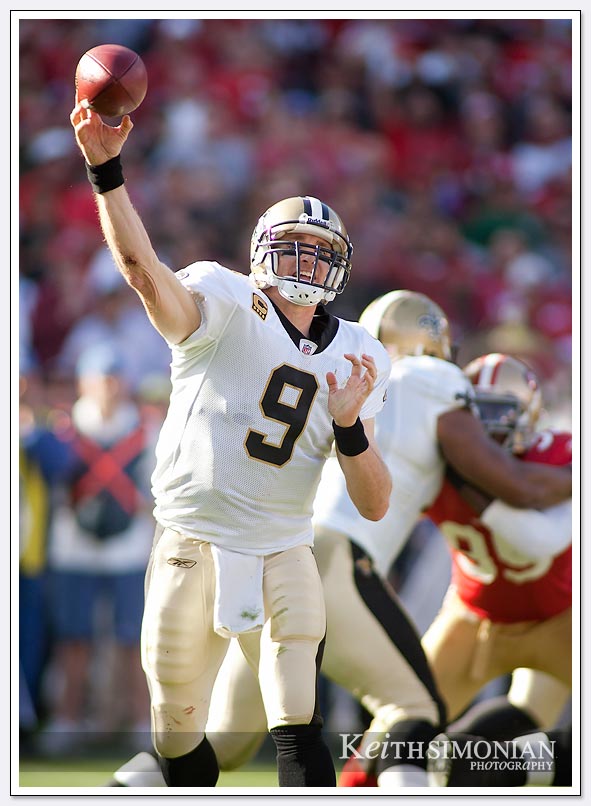 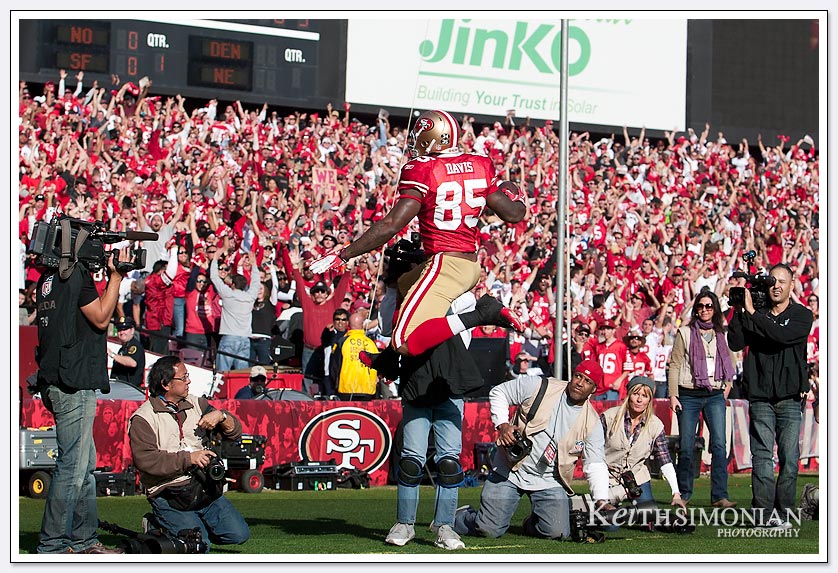 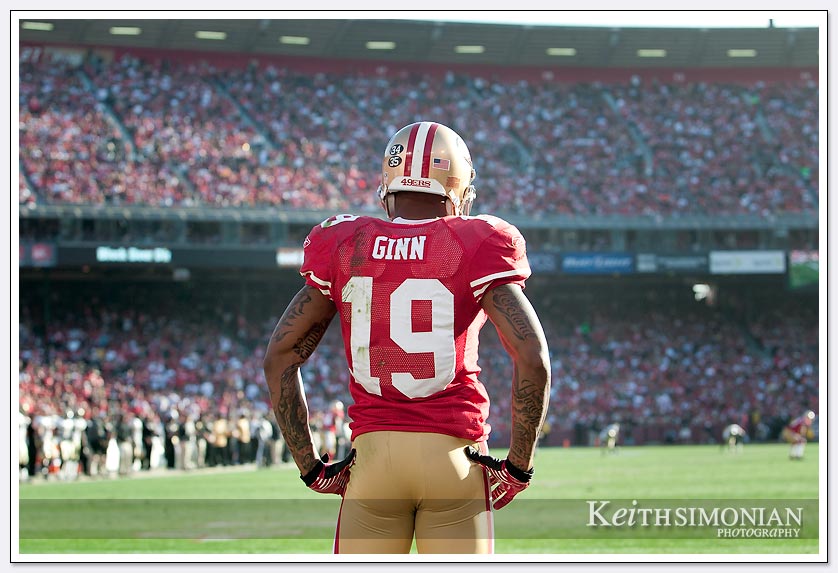 49er Linebacker #52 Patrick Willis tackles #10 Eli Manning for a loss during their regular season meeting at Candlestick park that the 49ers won 27-20. 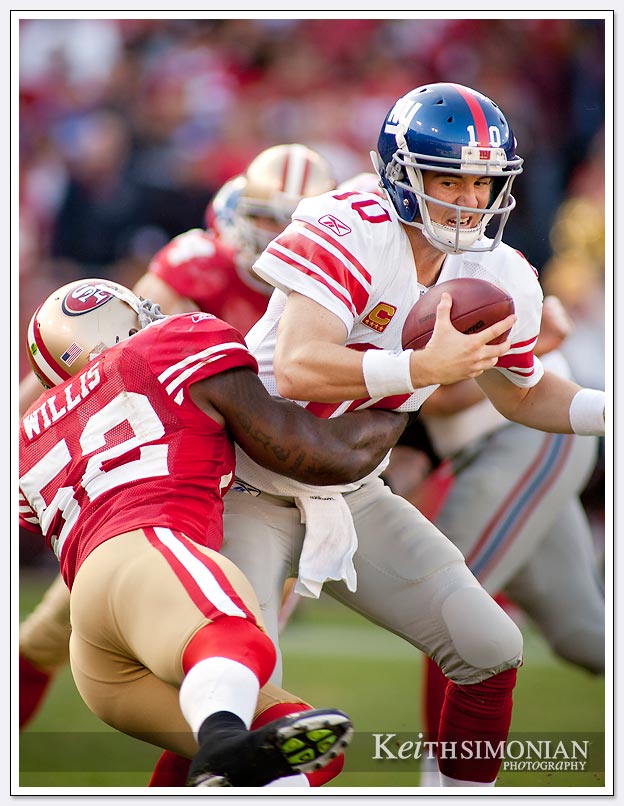 Touchdown catch by #82 Mario Manningham with the Fox Television dual camera sideline cart in the background. 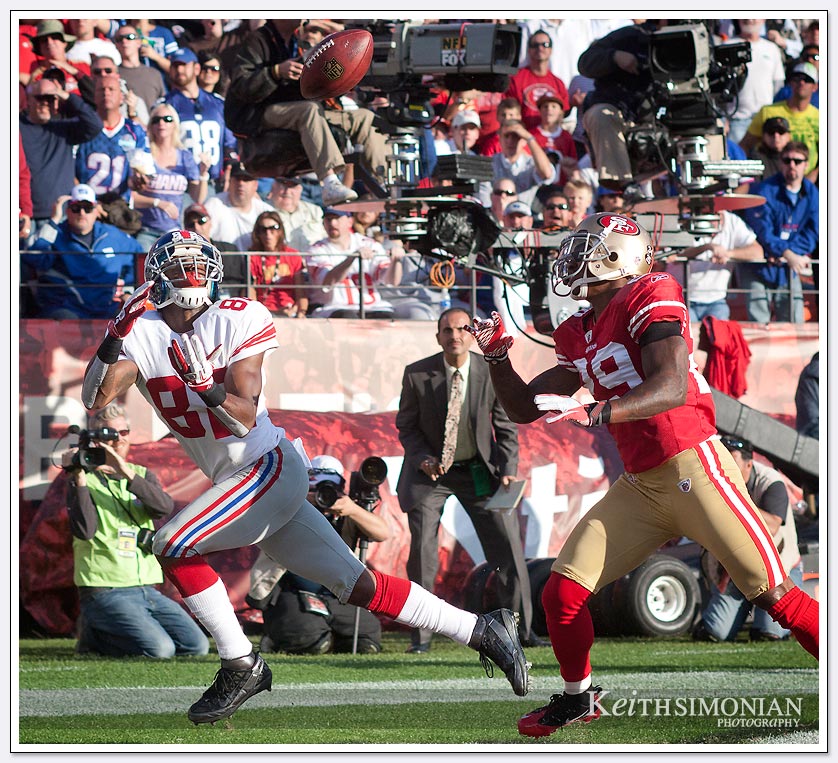 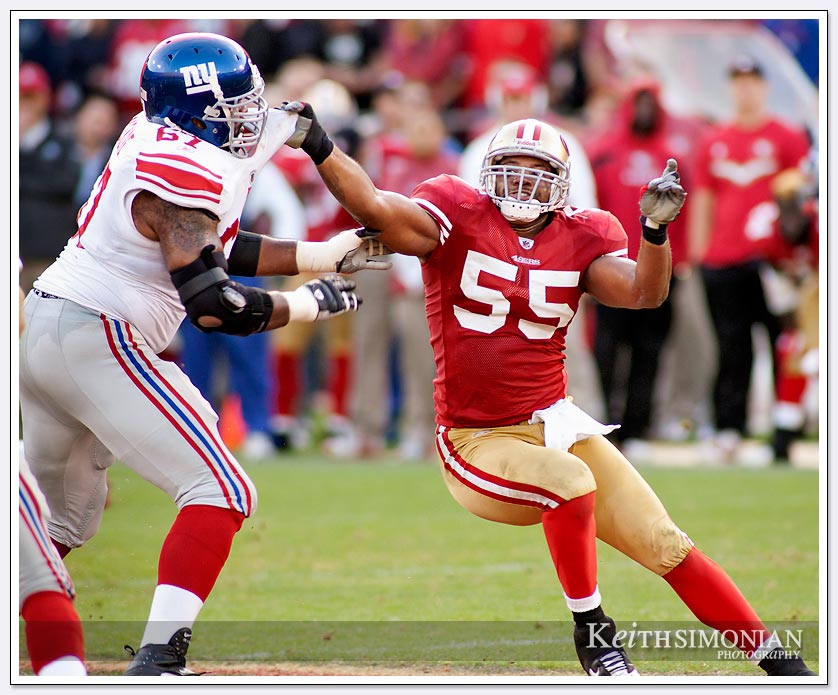 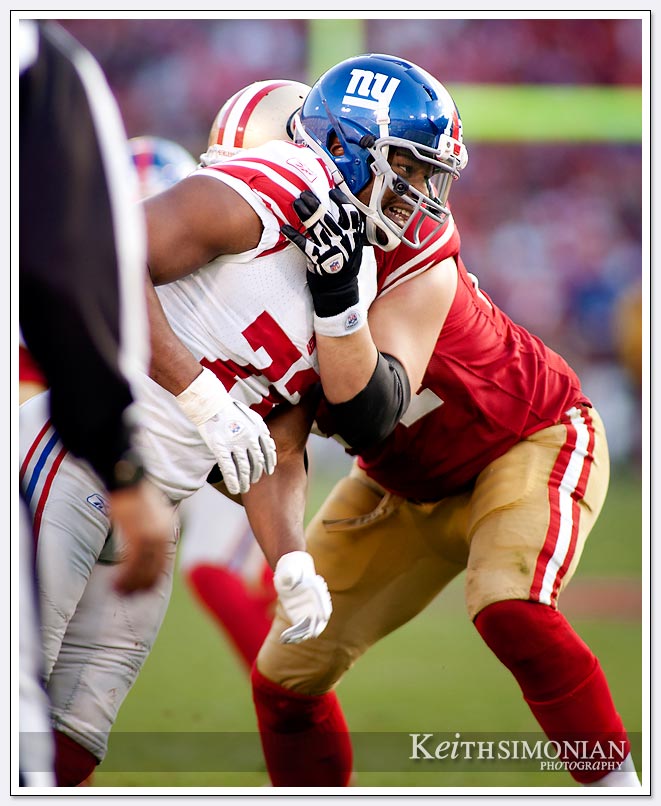 Alex Smith, meet Osi Umenyiora. The 49ers are hoping to hold the Giants pass rush at bay. In this photo #72 Osi Umenyiora tackles #11 Alex Smith just as he releases the football during their November 13th regular season meeting the 49ers won 27 to 20. 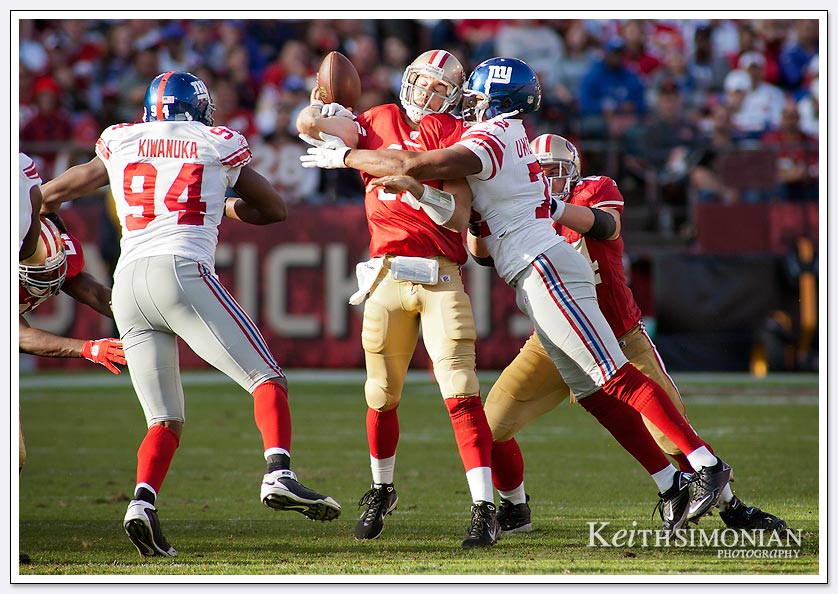 AFC – NFC Championship update: The New England Patriots beat the Baltimore Ravens 23-20 in the AFC Championship game. The New York Giants prevailed over the San Francisco 49ers 20 to 17 in overtime with a 31 yard field goal. The Patriots will face the Giants in Super BowlÂ XLVI on February 5th at Lucas Oil Stadium in Indianapolis Indiana. Super Bowl update: The New York Football Giants were victorious over the New England Patriots 21 -17 to claim the Super Bowl Championship.

December 28, 2012 News – Things were all smiles for New Orleans Saints head coach Sean Payton before the NFL 2nd round playoff game against the San Francisco 49ers at Candlestick Park. It turns out the 36 – 32 loss to the 49ers that day would become the least of the coach’s problems. Saints head coach Sean Payton would become one of the leaders of what became known at Bountygate. For his part in the Saints Bountygate program, Payton would be suspended for the entire 2012 season by NFLÂ Commissioner Roger Goodell. Because of provisions in his contract, the contract extension that Payton signed in 2011 that would have seen him as head coach through the 2015 season was voided. Today come word that Sean Payton has signed another contract extension that will see him as the head coach for the Saints and allow him start working for the Saints right after Super Bowl XLVII which takes place inÂ Mercedes-Benz Superdome in New Orleans, LA. 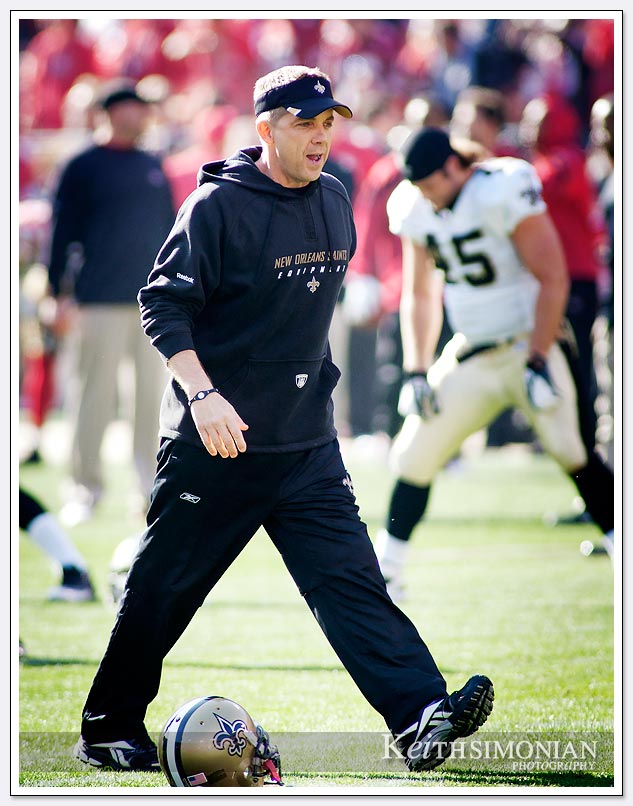