For over a year I have been collecting Photoshop CPU benchmark times on the Improved Photoshop radial blur test. The first test scores for Intel’s new Sandy Bridge CPU have been posted and they are smoking fast and clearly offer the most bang for your high end CPU dollar.

One of my many European readers, Bruce Murry from England posted a time of 21.5 seconds on a home built computer based on the the Intel i5-2500k . Using an old Dell case and already purchased hard drive he put together the system which also included a 64 GB SSD for Â£541 including the VAT. Using the same parts Murry did, I was able to price them at $685 at newegg.com. Here is a list of the components used.

HP is again shipping their high perform desktop computers featuring the Sandy Bridge CPUs. After the “little problem” Intel had with the motherboards for the Sandy Bridge CPUs, HP stopped using next generation Intel CPUs. Currently HP is selling a model quite similar to the build Murry made for $709. That would be the HPE510t model with an upgrade to the Intel i5-2500 3.3 GHz CPU with turbo boost to 3.7 GHz.

Melwin Silva, a reader from the North Jersey/New York Metro posted an overclocked speed tying record time of 14.2 seconds using the Intel i7-2600k running at 5.1 GHz instead of the normal 3.4 GHz rate. Melwin’s desktop computer was also a home build that features water cooling for the CPU, a 12 TB 8 drive Raid 6 array, and 4 drive Raid zero 240 GB SSD set up. The total price for the entire set up was $3636. Even more impressive is if you strip out the price for all the extra hard drives, and the extra video card ( he’s running 4 monitors ) you get a price tag of about $1700 for the top of the line desktop computer using the Intel Sandy Bridge CPUs.

Don’t forget to head on over to the free photoshop radial blur test and find out how your current CPU stacks up.

Update: I’ve added the CPU test time chart from the Photoshop Radial blur CPU test so you see all the times including the just published Sandy Bridge CPU times.

April 27, 2011 Addition Results – Just received the first test time for a Sandy Bridge i7-2600k CPU run at factory specs ( 3.4 GHz ). The time was 20.0 seconds on a Win 7 machine. Time once again for a Mac vs PC comparison. You can purchase a HP PC with the Intel i7-2600k CPU with 8 GB of RAM for $899. That CPU will get you a test time of 20.0 seconds. The current comparable Mac desktop is a Mac Pro running a 2.8GHz Quad-Core Intel Xeon “Nehalem” CPU with 3 GB of RAM, that computer will get you a test time of 19.9 seconds and will cost you $2499. So the comparable Mac Pro is $1600 more and comes with less RAM. I’ll let the reader draw their own conclusions as to which desktop computer is a better value.

June 24, 2011 Update: With my just purchased HP HPE h8xt ( configured as h8-1070t ) I’ve joined the sub 20 second club for the Photoshop Radial Blur CPU Benchmark test. The Hewlett-Packard computer that was less than 24 hours out of the box posted a 19.6 second time for the test running Windows 7 64 bit on Photoshop CS5 64 bit using a Intel i7-2600 3.4 GHz CPU with turbo boost to 3.8 GHz. The screen capture below shows the Photoshop Radial Blur test running along with Windows Task Manager displaying the CPU usage history and the allotted memory. While the Intel -7 2600 has 4 cores, it runs 8 threads. In this photo we see that all 8 threads are running at 100%. For most of the test the CPU usage was in the 97% to 100% range. 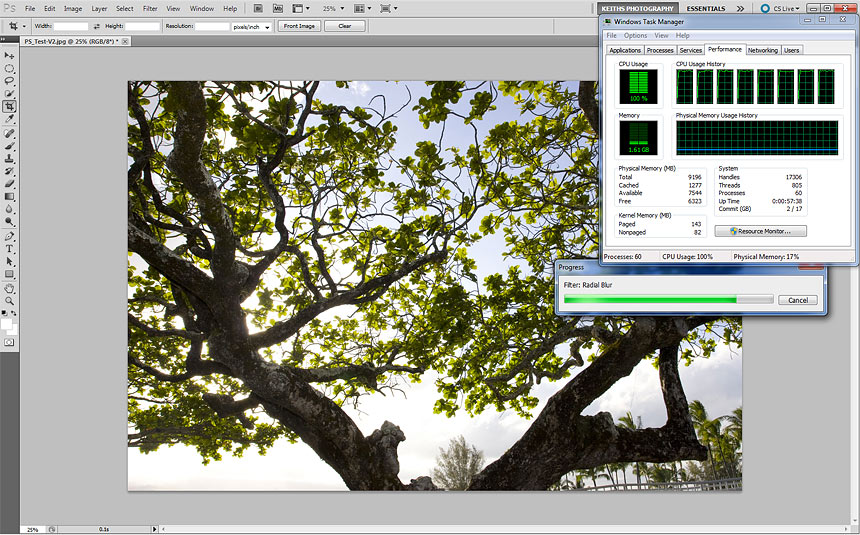