In what should be the end of  a wild and wacky two weeks for the Stanford Cardinal college football team and the San Francisco 49ers of the NFL, Jim Harbaugh signed a 5 year $25 million deal to be the 49er head coach on Friday January 7th.

The drama started unfolding two weeks earlier on December 26th with the 49ers loss to the St. Louis Rams which eliminated the 49ers from playoff contention. After traveling home from St. Louis that day, 49er head coach Mike Singletary was fired by team president Jed York at the team’s headquarters in Santa Clara, California. On Monday December 27th Jed York announces the 49ers will hire a General Manager, something they didn’t have all season. It was also announced on Monday that 49er defensive line coach Jim Tomsula would be the interim head coach for the last game of the season on Sunday January 2nd against the Arizona Cardinals. On Wednesday December 29 reports say that Jed York has already selected 49er personal chief Trent Baalke to be the team’s new general manager.

On Sunday January 2nd the San Francisco 49ers defeat the Arizona Cardinals 38 to 7 giving interim head coach his first NFL win in the head coaching role. The game most likely also was the last as a 49er for former first round pick quarterback Alex Smith. With the 49ers now in full head coach search mode, the name most often mentioned at the top of that list is Jim Harbaugh. On Monday January 3rd, the Mike Harbaugh coached 4th ranked Stanford Cardinal routs Virginia Tech 40 to 12 in the Orange Bowl in Miami, Florida. After the game it’s safe to say the Jim Harbaugh is the most sought after head coach in either college or professional football with Stanford hoping somehow to hold on the their hot property, the University of Michigan Wolverines hoping to lure back their college alumni Jim Harbaugh to coach, the Miami Dolphins looking a possible head coaching change, and the San Francisco 49ers looking for a coaching upgrade after the dismal performance of Mike Singletary.

On Tuesday January 4th the 49ers announce they have indeed hired Trent Baalke to be their new General Manager. Across the bay in Oakland on the same day the  Raiders announce they will be firing their head coach Tom Cable.

Now things really start to get hectic. On Wednesday January 5th, the University of Michigan fires their football head coach Rich Rodriguez after a disappointing three years on the job with a 15-22 record. It’s reported the Jim Harbaugh isn’t interested in returning to his alma mater even though the school would most likely throw a pile of money at the coach. The new 49er GM Trent Baalke interviews Oakland Raider offensive coordinator Hue Jackson for the vacant head coach position. Jackson is also rumored to be in line for the head coaching job at the Raiders. After that meeting  both Baalke and Jed York meet with Jim Harbaugh for 6 hours, while Miami Dolphin owner Stephen Ross files to San Francisco to meet with Harbaugh. At this point the Dolphins still have a head coach, Tony Sparano.

Thursday January 6th is greeted with the news that Stanford quarterback Andrew Luck who is a mortal lock to go first in the NFL draft decides to stay another year in school to get his degree in architectural design. The rumor mill is flying with stories that Jim Harbaugh will take the Miami Dolphins head coaching job for a reported $7 million to $8 million a year. At this point the Dolphins still have a head coach, that being Tony Sparano. It’s also rumored that Stanford University is trying to pony up some big bucks and keep Harbaugh on job there.

Friday January 7th is greeted with the news at 12:30 pm that the 49ers will be holding a 3:30 pm press conference at the Palace Hotel in San Francisco. There it’s announced the Jim Harbaugh has signed a 5 year $25 million deal to be the head coach of the San Francisco 49ers.  On Saturday January 8th the Miami Dolphins announce they are giving their current head coach Tony Sparano at 2 year extension on his contract through the 2013 season.

This photo shows then Stanford head Jim Harbaugh  during the team’s 48 to 14 victory over the Golden Bears of California in the 113th Big Game played this year in Memorial Stadium in Berkeley. 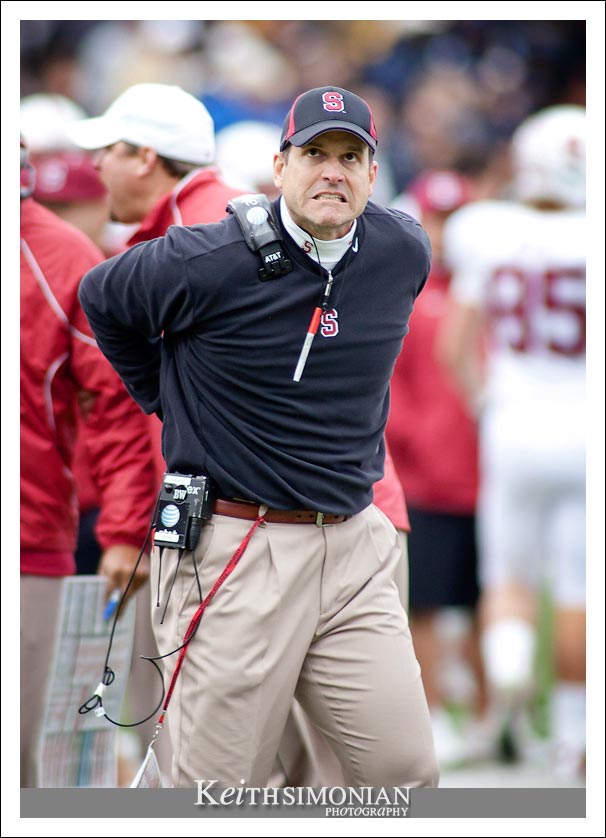 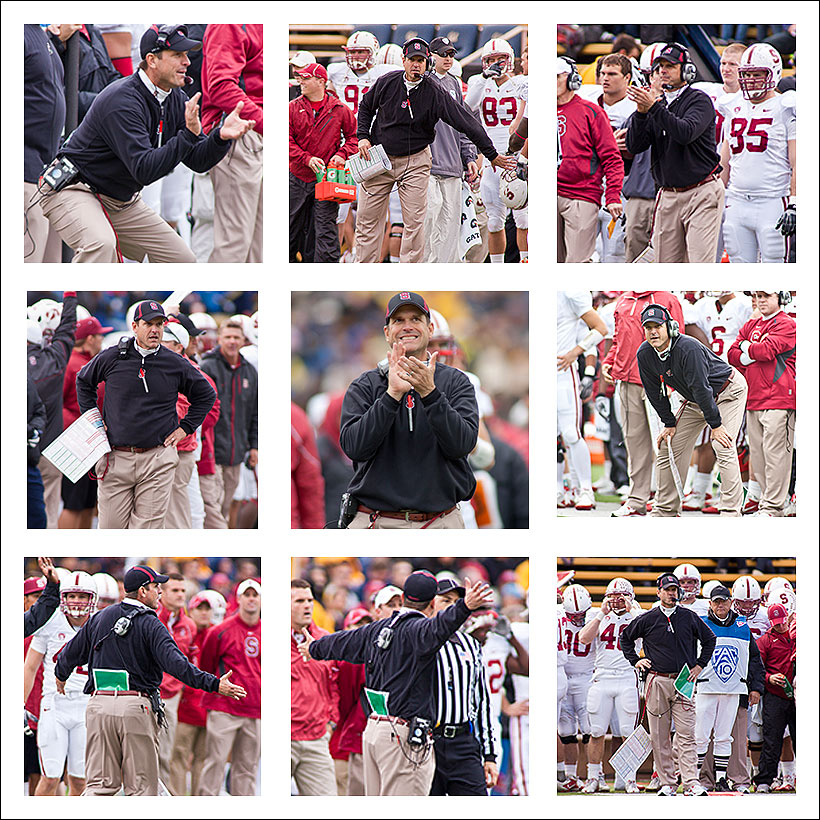 January 13th, 2011 update:  Stanford University has selected David Shaw has it’s new head coach. Shaw was Stanford’s offensive coordinator for the past four years on head coach Jim Harbaugh’s staff. Shaw becomes the 34th head coach of the Stanford football program. He is the first alumni to hold the job since Paul Wiggin had the job from 1980 to 1983.  Shaw played at Stanford from 1991 to 1994 under head coaches Bill Walsh and Dennis Green.  Shaw was with Jim Harbaugh as the wide receiver coach and passing coordinator during the 2006 season at the University of San Diego.

January 14th, 2011: The San Francisco 49ers today announced the hiring of three new coaches. The new coaches are Greg Roman as offensive coordinator, Vic Fangio as defensive coordinator, and Tim Drevno as offensive line coach. All three coaches were on Jim Harbaugh’s staff at Stanford this past season. The Jim Harbaugh led 49ers will meet the Baltimore Ravens who are led by Jim’s older brother Mike Harbaugh. The game will take place in Baltimore at a date to determined when the complete NFL schedule is released.

2012 NFL Playoff update: The 49ers finished the 2011 NFL regular season with a 13-3 record and a 2nd seed in the NFC playoffs. That 2nd seed gave them a bye week in the first round of playoffs. The 49ers hosted the New Orleans Saints in the Divisional playoffs who were victorious over the Detroit Lions 45 to 28 in the first round of playoffs. Two late 4th quarter drives sealed the 49ers 36-32 victory over the favored New Orleans Saints.

The Niners will host the New York Giants who upset the defending Super Bowl champion Green Bay Packers 37-20 at Lambeau field in Green Bay Wisconsin, in the NFC championship game on Sunday January 22. An interesting note is that the Jim’s older brother John Harbaugh will lead the Baltimore Ravens against the Tom Brady lead New England Patriots on Sunday in the AFC championship game.

January 2015 Update: The Jim Harbaugh – San Francisco 49ers era lasted 4 short years, but it was filled with many victories, 3 consecutive NFC Championship game appearances and one Super Bowl. Jim Harbaugh’s 44-19-1 regular season record leaves him as the NFL coach with the 5th highest winning percent ever, and the best winning percentage of a coach during the salary cap years with started in 1994. Just two days after leaving the team Jim Harbaugh was announced as the new head coach at Michigan University.  On Thursday January 15th the 49ers announced the defensive line coach Jim” Tomsula would be promoted to the job of head coach. 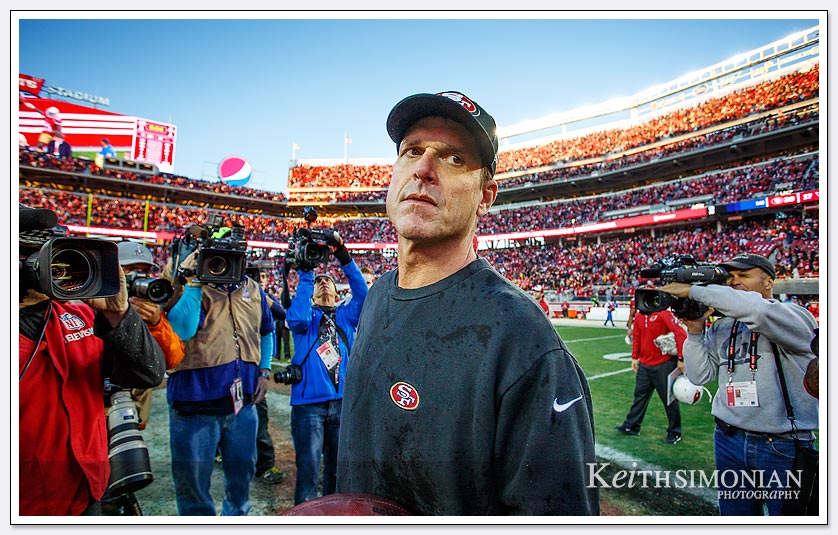 This photo shows 49er head coach  Jim Harbaugh just seconds after coaching his last game for the team on Sunday December 28th in a victory over the playoff bound Arizona Cardinals at Levi’s Stadium in Santa Clara. The football he is caring was handed to him by 49er defender Craig Dahl after he made an interception that sealed the win. Just after receiving the football Harbaugh was dosed with Gatorade to celebrate the victory and what would be the last game with the team.